It was a day when we had high hopes…to sweep the Cardinals but it was not to be.  Sunday was an exceptionally beautiful day, slightly cloudy, no breeze.   I sound like a broken record…but folks, this is Los Angeles!!  It was an early evening game because it was to be telecast on ESPN.  Usually Sunday games are earlier in the day but I was happy it wasn’t because the direct sun can be very hot.

There was no batting practice but we didn’t know that so we had arrived 3 hours before game time as usual.

Brandon McCarthy was running and stretching out on the field.   He said he wasn’t quite ready to come back but was getting better. 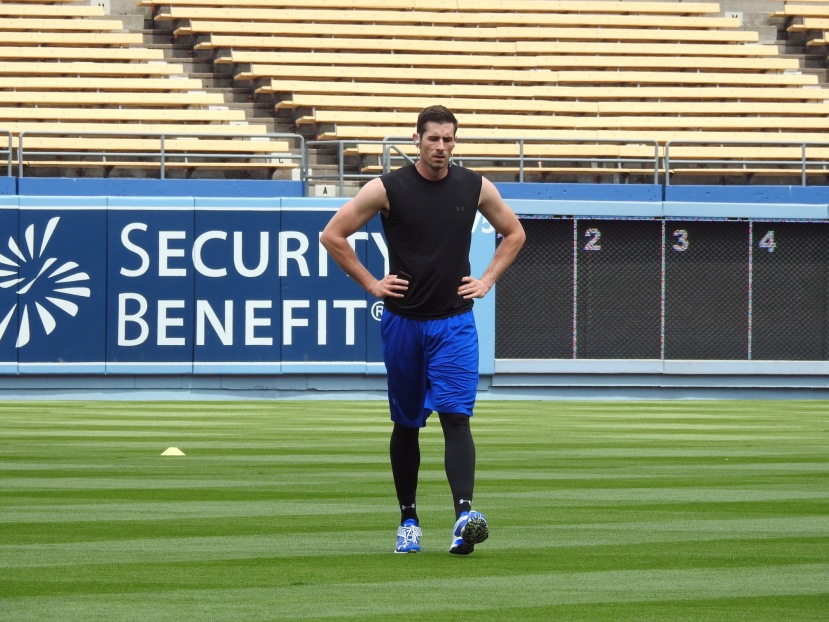 He’s always nice to the fans. 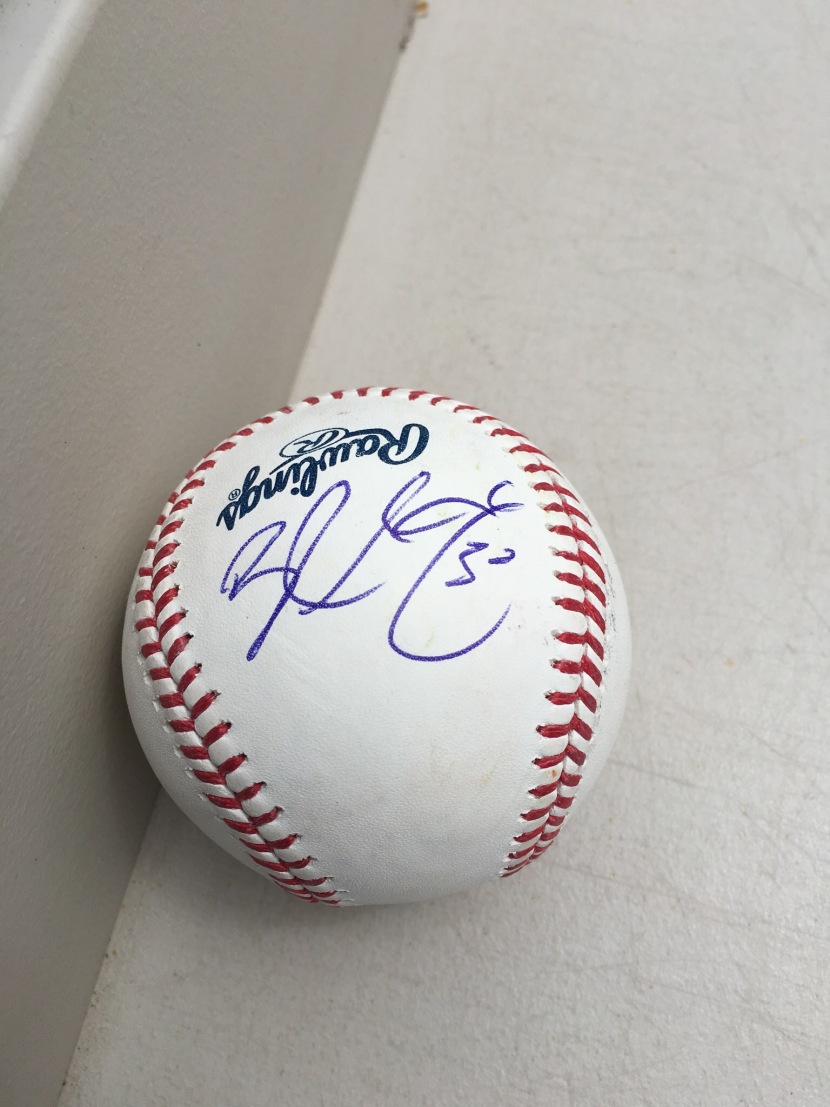 Believe it or not, I got his autograph.  I’m not that into autographs. 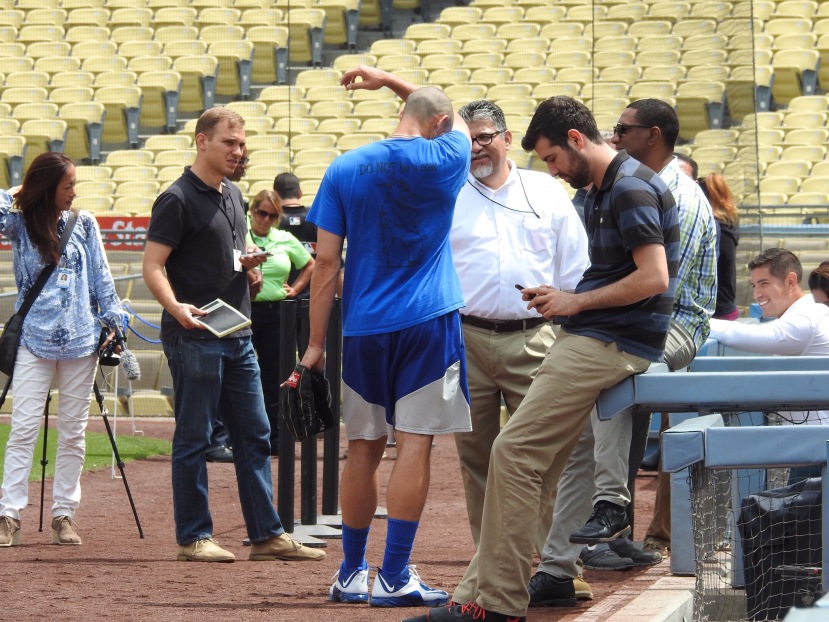 Trayce Thompson was also on the field giving pointers to young baseball players.  He had some good advice on the back of his shirt. 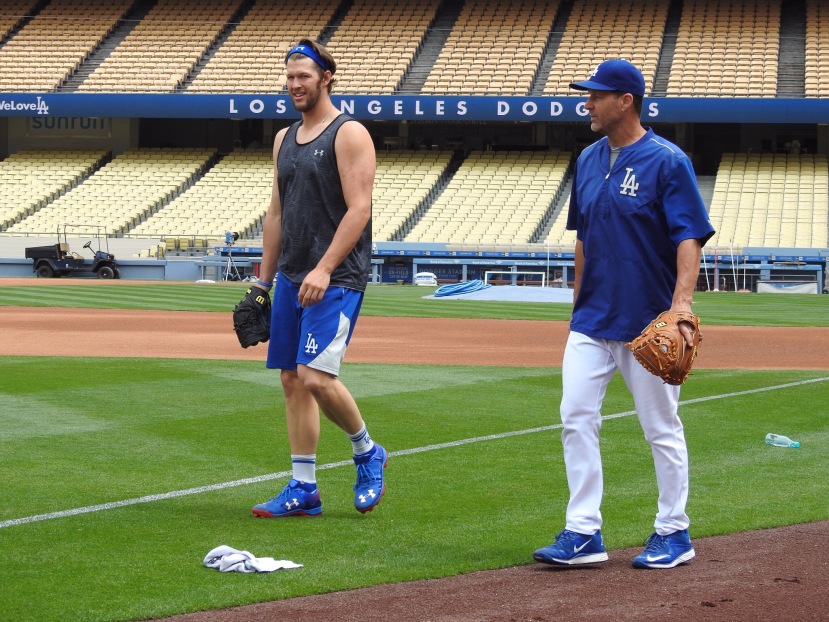 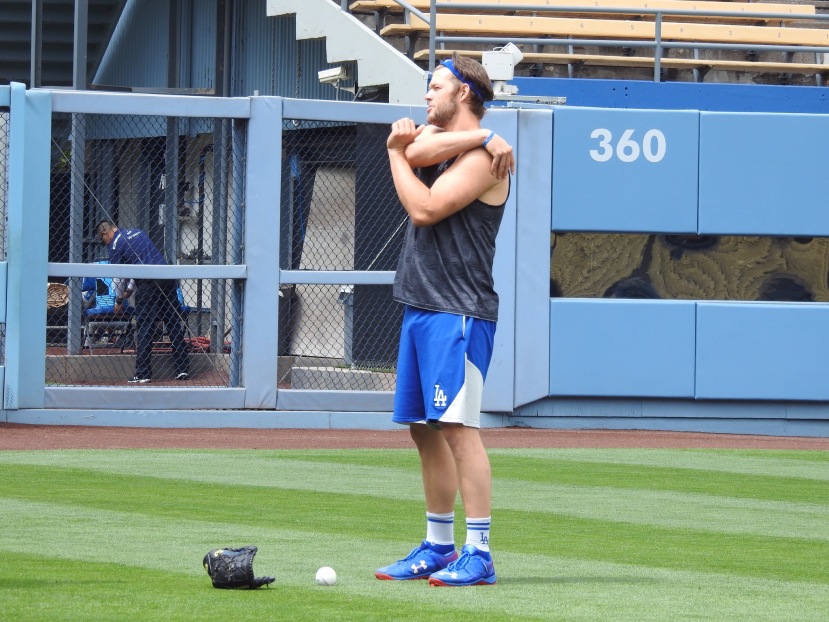 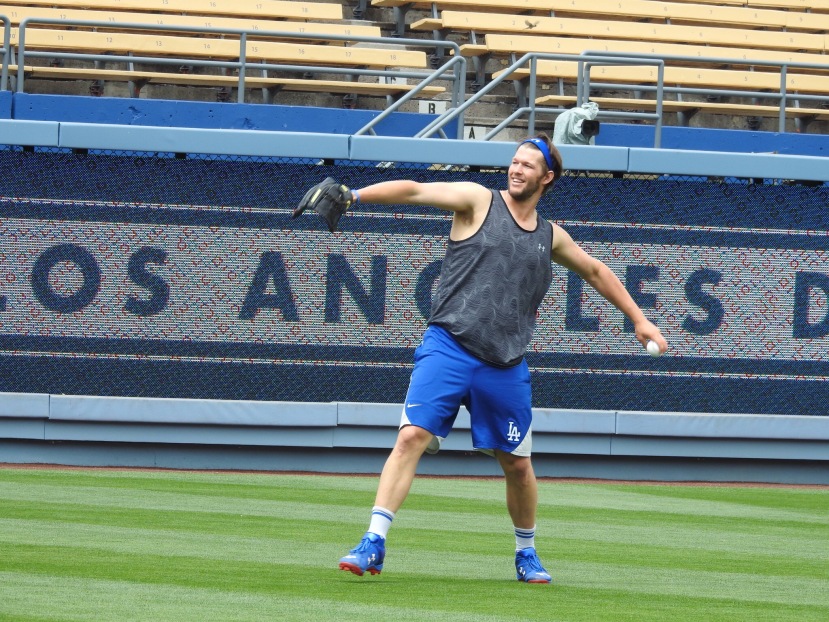 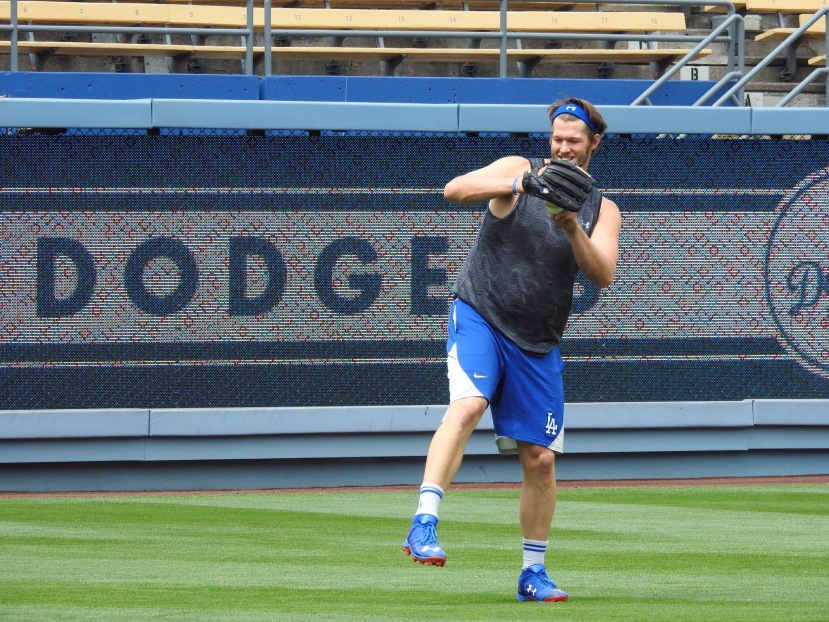 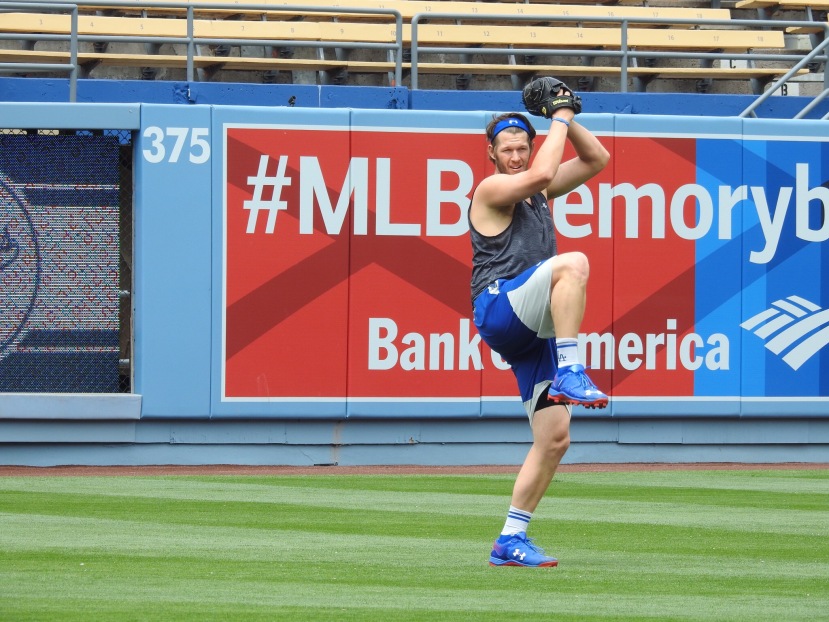 Clayton was next to come out to the field to work out.  I never tire of watching him.   He is big and strong  yet graceful. 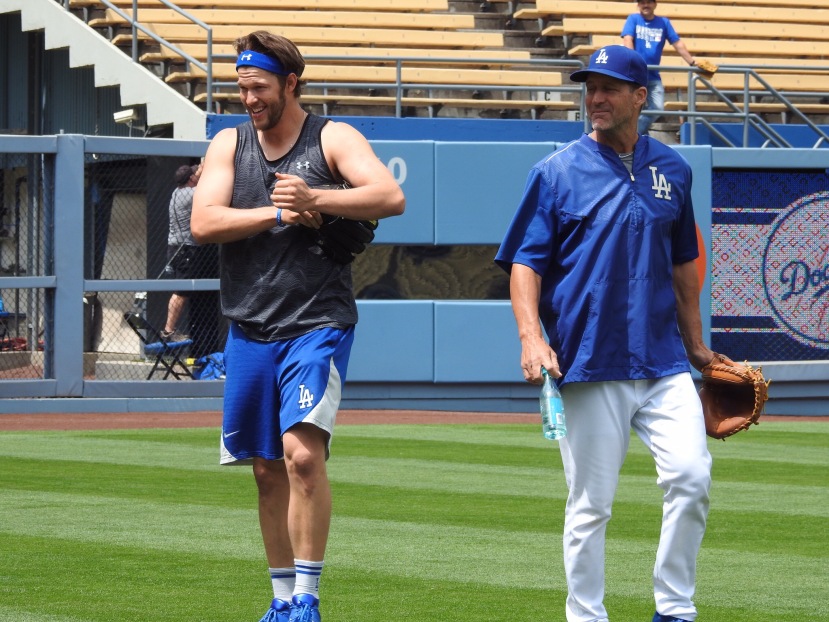 He was in good spirits. 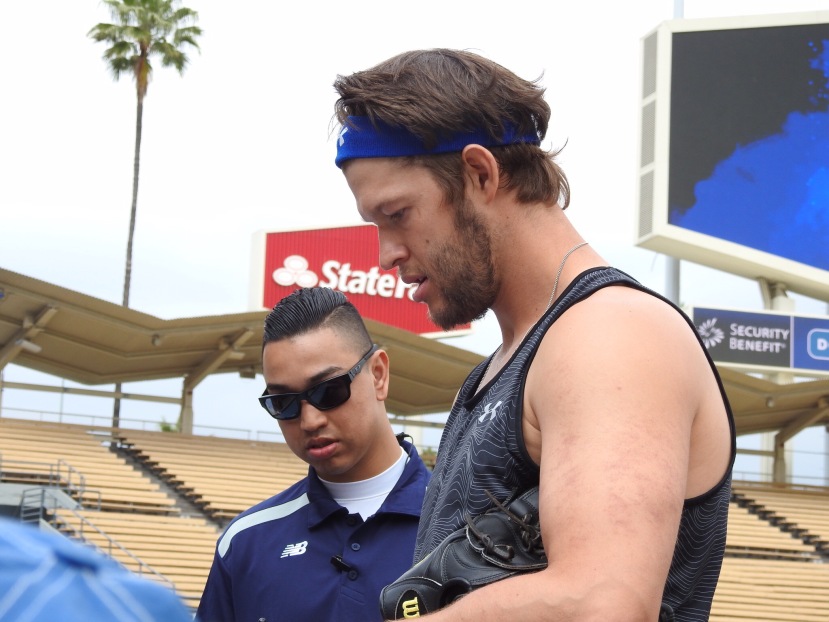 And surprised everyone by signing autographs.

I don’t do this often and here I got my second autograph in 10 minutes.  But how can anyone pass up a Clayton Kershaw autograph?? 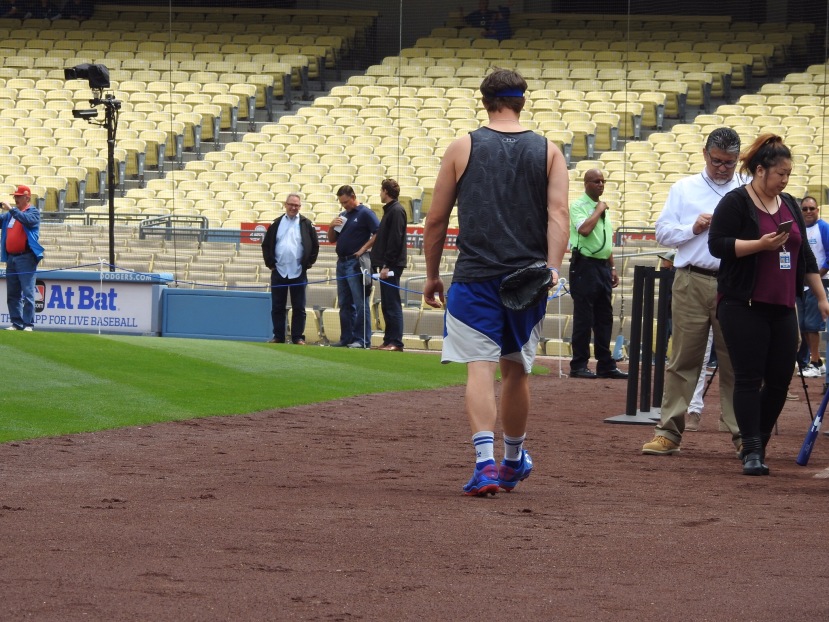 I met two wonderful fans: Kyle and his son Alec.

Kyle gave me a Kenta Maeda baseball card.  Thank you Kyle.  He even put it in plastic for me. 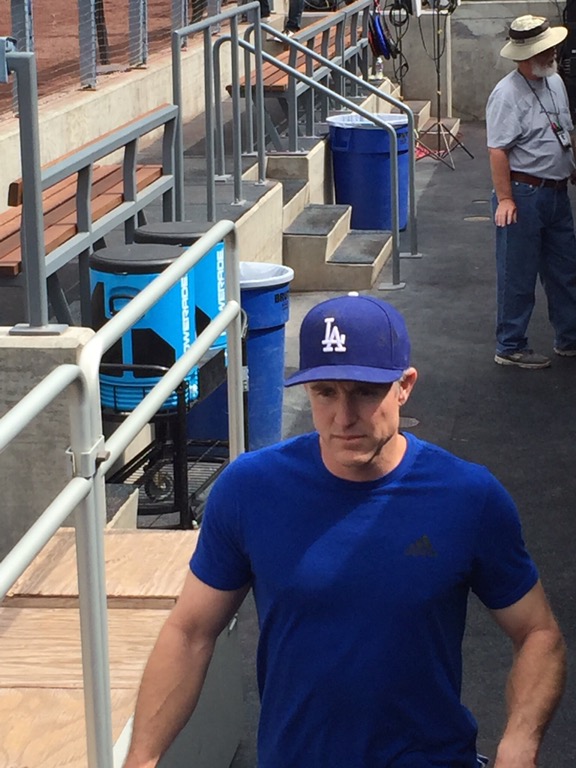 Then Chase Utley walked through and surprised everyone by signing for two little boys.

I went up to the club to eat.  The fare included succulent chicken wings, beef stroganoff, and fish.  Interesting combination but it worked.

The salad as usual was yummy.

The best part of my game day always is being with my wonderful friends.  If it weren’t for my friends, the day would be pretty empty.  Hi Yoshiko.  Thank you for the tea.

And there were my twins again.  Duke was taking a breather and Klayton was his usual sunny self.

I went back to the field and Kyle offered me a very game used ball.  Photobombing this picture is his adorable son Alec who showed his opinion about the ball. 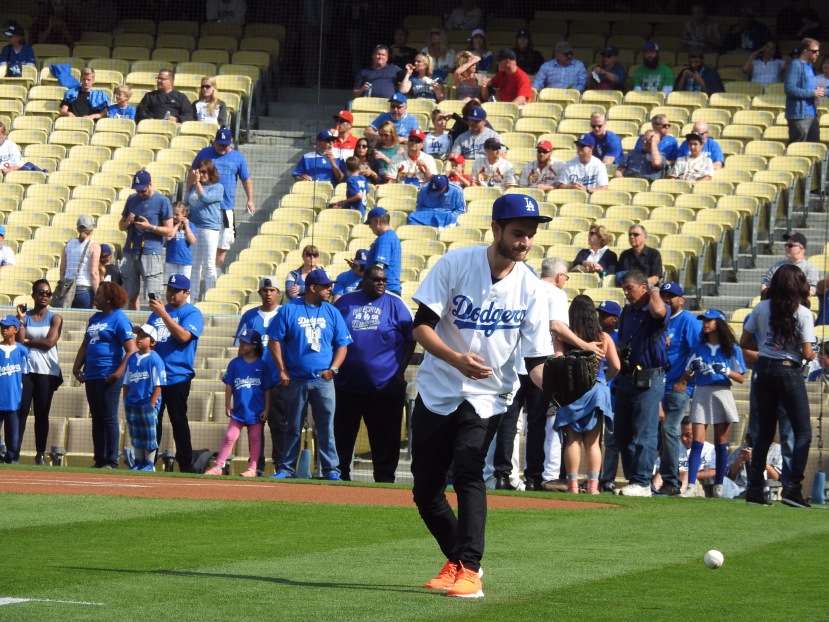 Zedd was very serious about throwing out the first pitch and practiced with Emily the batgirl. 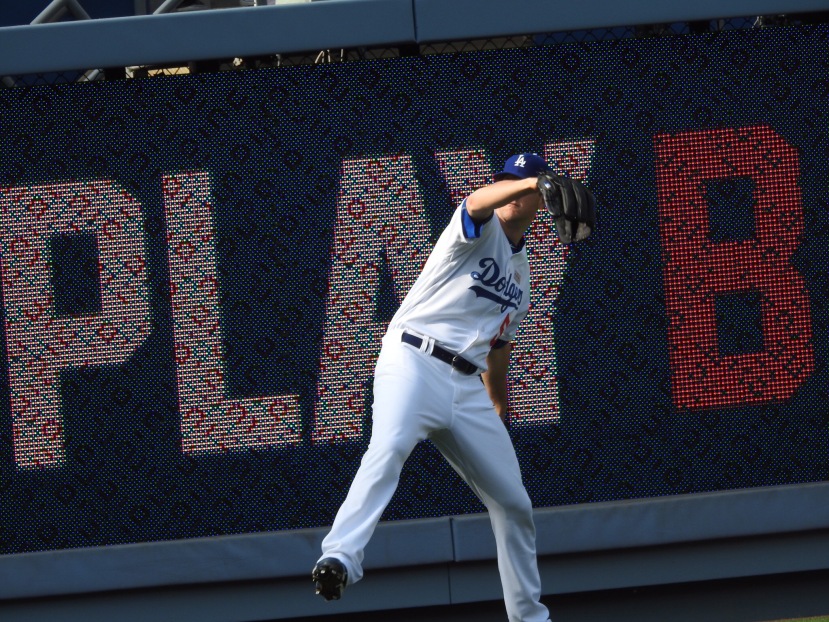 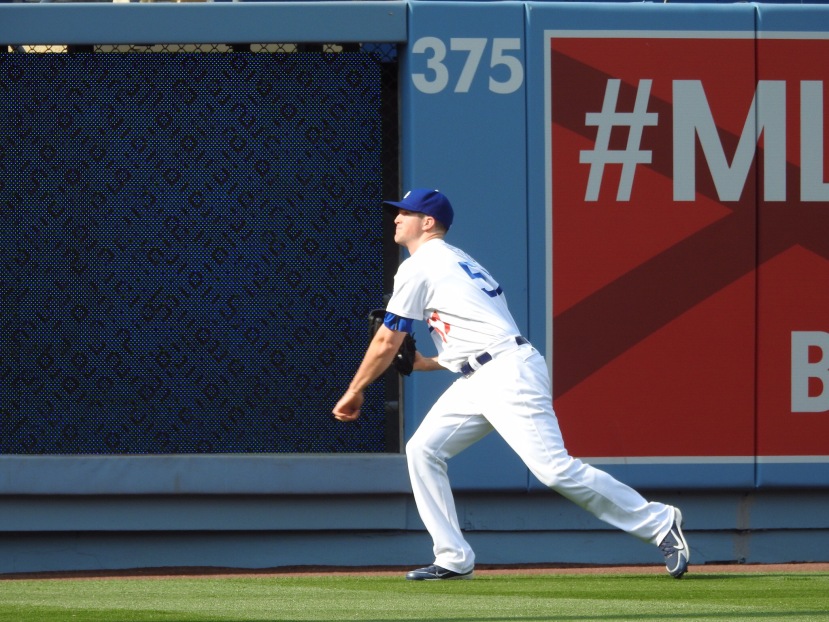 Chase as usual was the first one out to stretch

Followed by Joc and Corey

National Anthem…..fantastic view!!  The dark sky was replaced by a blue sky with huge billowy clouds.

A little catch between friends. 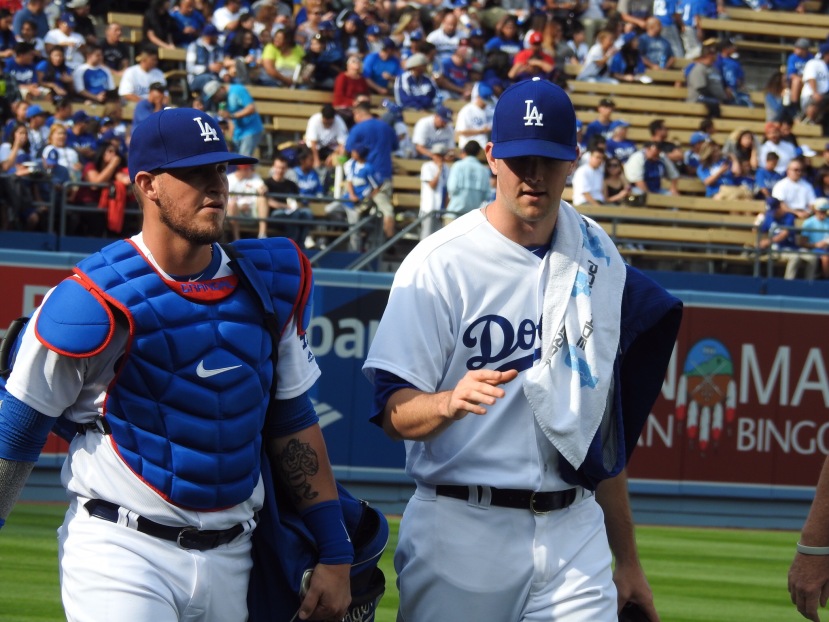 Yasmani and Alex made the long walk from bullpen to dugout.  Alex was already feeling it.  He usually does better at Dodger Stadium than on the road. 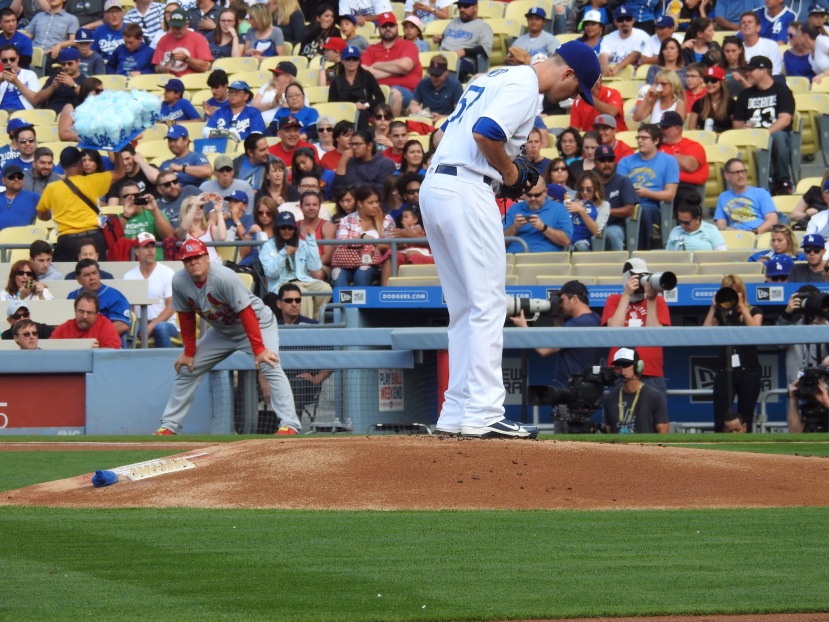 Mike Leake, the Cardinals pitcher had a strong outing as did Alex.  In fact, when the pitching is good, the game can be boring.

Maybe not so boring when you have a Cardinals fan sitting right next to you.  Alan wasn’t too bad a seat mate.  He is a little disappointed in the Cardinals performance to date but I told him that they will later get better and be a pain to the Dodgers.

I must have been a little bored because about the second inning I went around and took a few pictures of my friends. 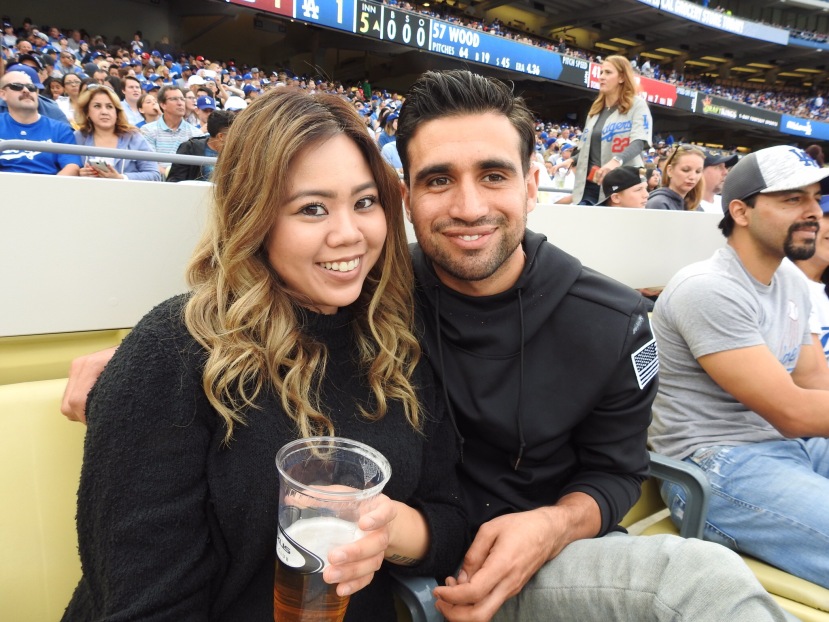 I even checked out the Cardinals dugout

The only excitement on the Dodgers side was Corey’s solo homerun in the 3rd but the Cardinals answered with a homerun of their own. 1-1.
Alex Wood was taken out in the 6th but then the bullpen again imploded allowing 2 runs in the 7th with Joe Blanton pitching. 1-3.

In the 7th, the Cardinals sealed the deal with Joe Blanton still pitching, scoring another run. 1-4.

It was Italian ice time.  I decided it was ok with me that the Dodgers didn’t sweep the Cardinals.  They had won the series.  This home stand has been a good one so far.

Corey hit another homerun in the 8th inning, his second of the game, but that wasn’t enough.  2-5. What a game for Corey though!!
The bullpen had gone 8 games without giving up a run but this game they gave up 4 runs. It was a wasted effort for Alex Wood who actually had a good game. The Dodgers defense again showed their stuff with Joc making a huge catch in center and Chase Utley giving an all out effort as usual.

There was more excitement in Texas with the Blue Jays and Rangers brawling it out.  Blue Jays Jose Bautista and Rangers Rougned Odor got into a fistfight.  Then Blue Jays reliever Jesse Chavez hit Prince Fielder with the next pitch resulting in bench clearing.  Numerous players were ejected.  Bench clearing is always exciting but a little scary…I never want anyone to get hurt.

Turning the page as we say when the Dodgers lose, Monday’s game against the Angels will feature Dodger fave Kenta Maeda.  Maeda 2.30, 3-2 will face Shoemaker 9.12, 1-5, and also Mike Trout.  It is actually a 4 game series with the first 2 games in LA and the second in Anaheim.

Thanks for stopping by.  I appreciate all your support.  I have to say it is a lot more difficult to write a blog post when the Dodgers don’t win.  Hopefully it will be easier tomorrow.