It was a pretty good day until Thor came to Dodger Stadium.  We all felt pretty good about the walkoff the day before but the exhilaration of winning didn’t last long.

As it usually is on giveaway days, the line was long and frustrating.  They were allowing people with 10 tickets to hold up the line while their tickets were scanned.  These people are obviously selling the extra giveaways on EBay. My first frustration of the day.

We knew it would be a tough game but it seemed that the energy of the walkoff would carry on to the next game.  Kenta Maeda was matched up with Noah Syndergaard who has become a Mets powerhouse. 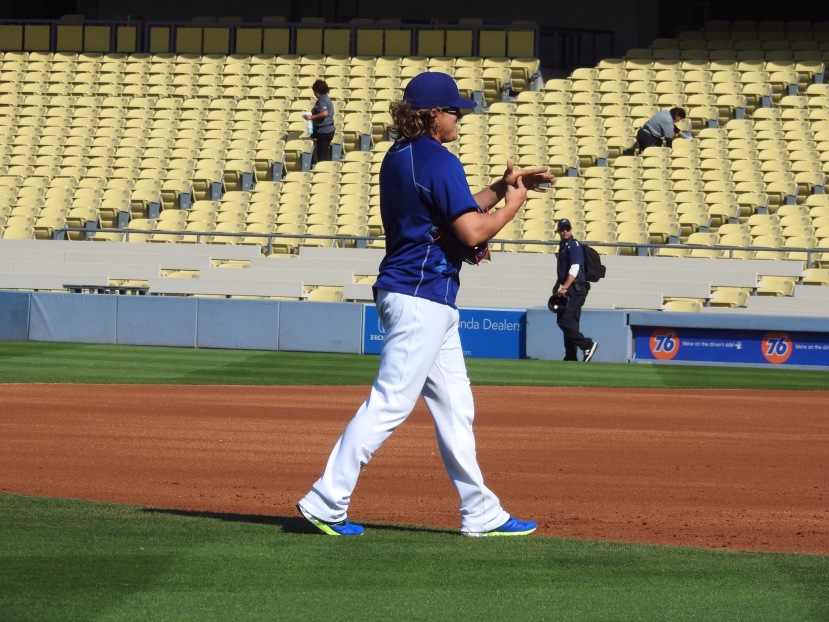 Little did we know during batting practice what a deflating loss it would be for the Dodgers.

Dodger offense will have to get better, especially when playing good teams like the Mets.  Does any other team have better starting pitchers than the Mets?

I decided to go up to the club. 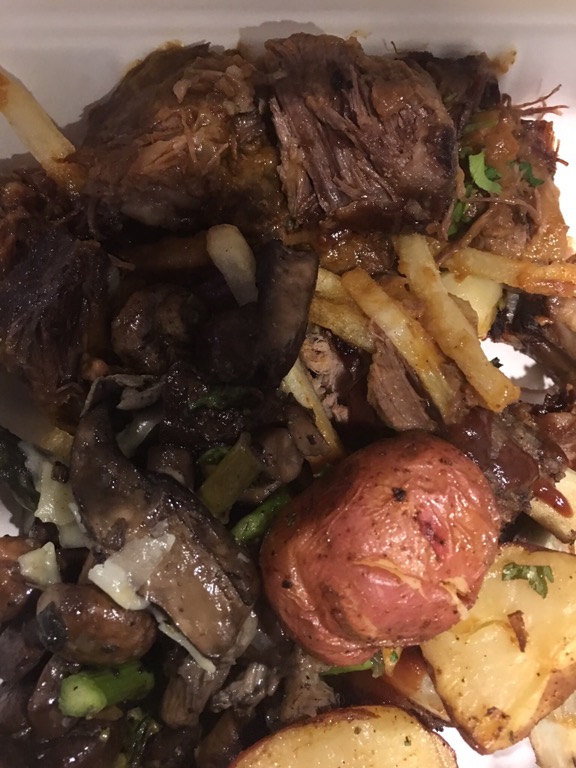 The food was especially good:  ribs and more ribs.  Tender, succulent.  Short ribs served on a bed of French fries.  Spare ribs so tender it fell off the bone.  Of course they ran out of spare ribs but they substituted prime rib. 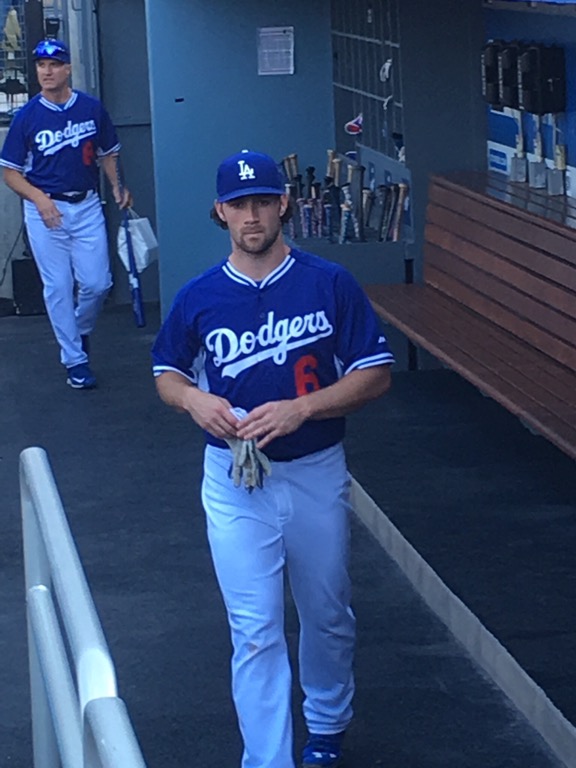 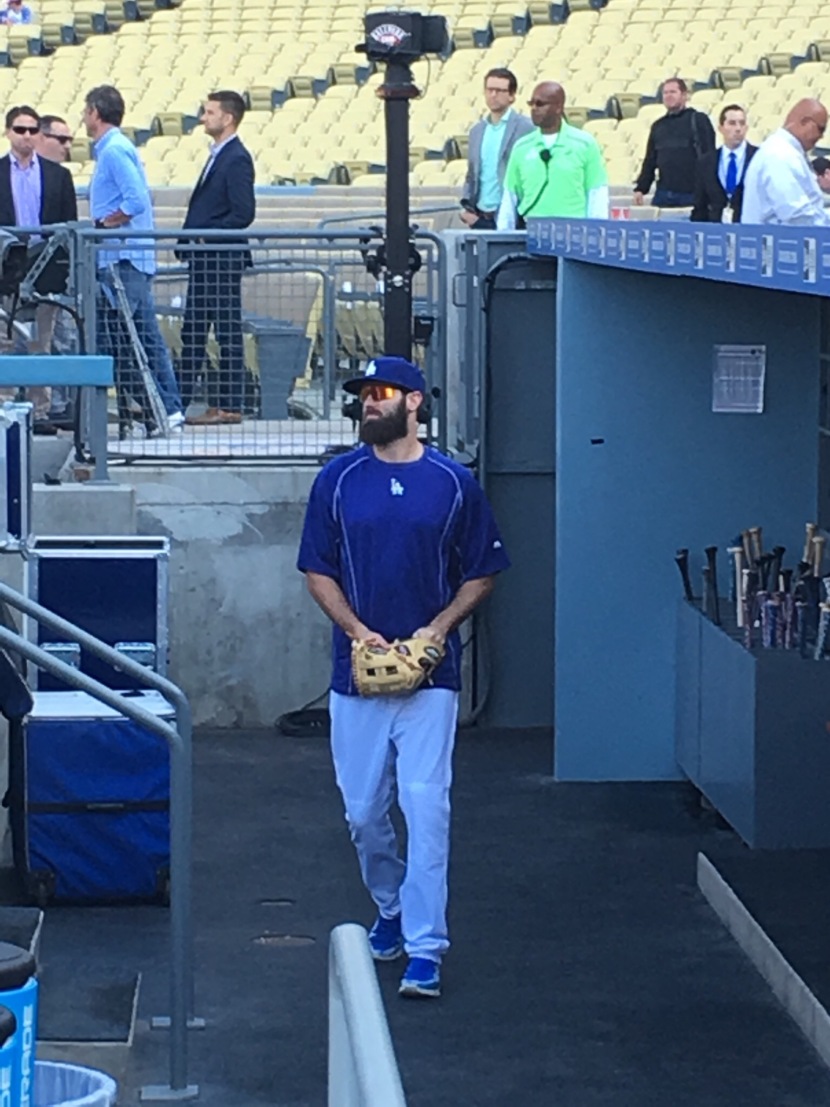 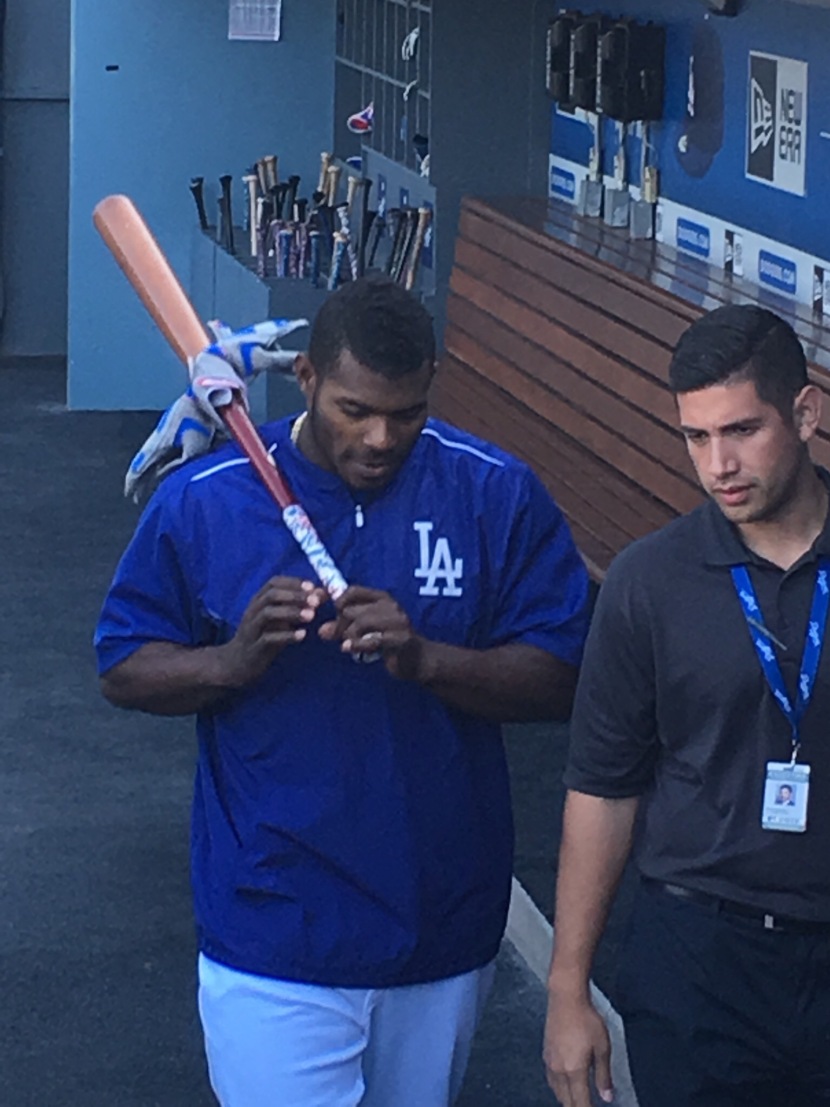 The guys were unsuspecting of the attack that Thor had planned.  They signed autographs for some enthusiastic autograph seekers who were obviously getting them to sell.  My pet peeve. 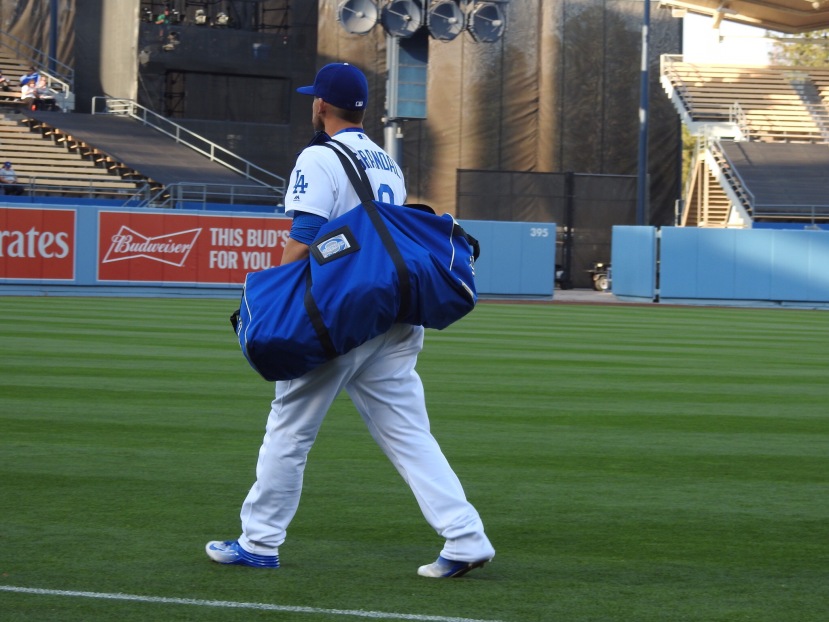 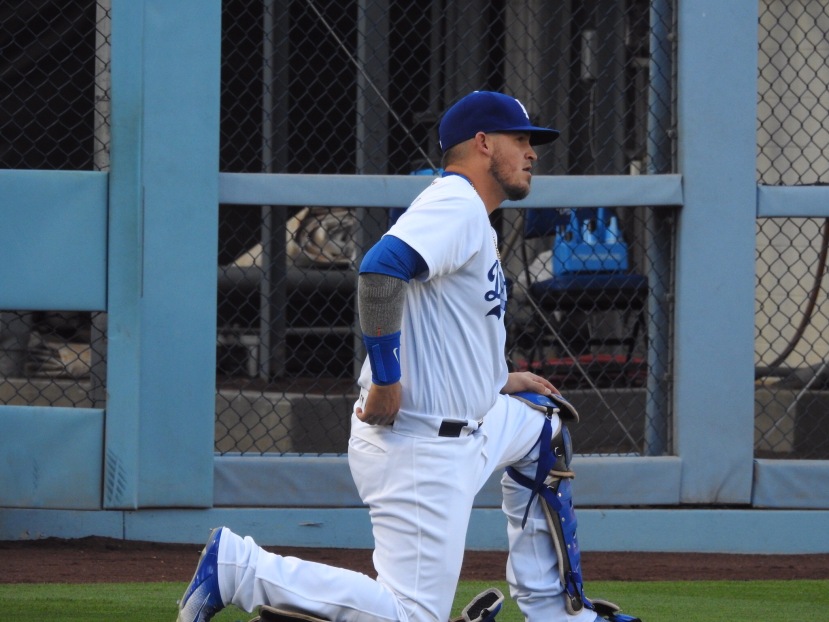 Yaz did his usual stretching and throwing

Yoshiko, Veronica and I had a cheering team ready when Kenta Maeda came down the field.  He looked focused and didn’t even hear us. 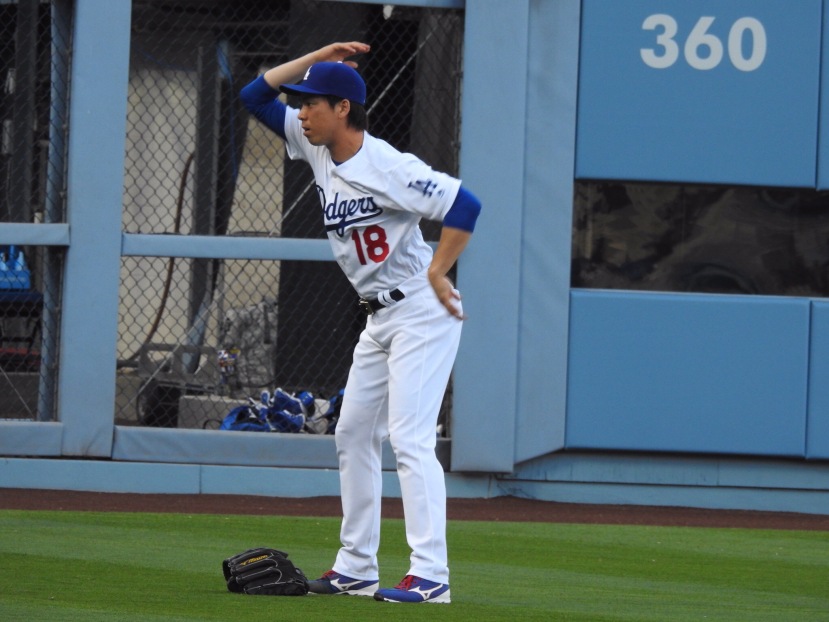 Kenta did his usual warm ups including his signature warm up with his arms. 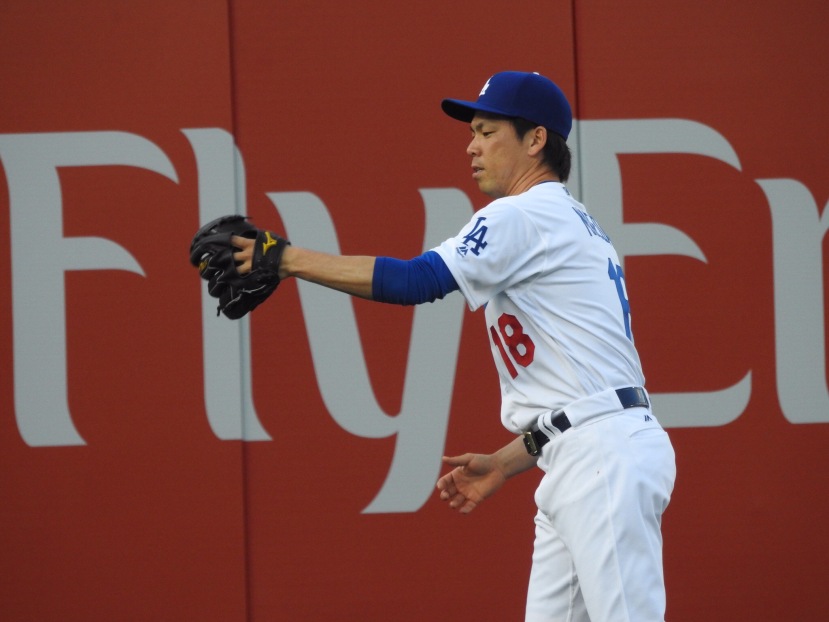 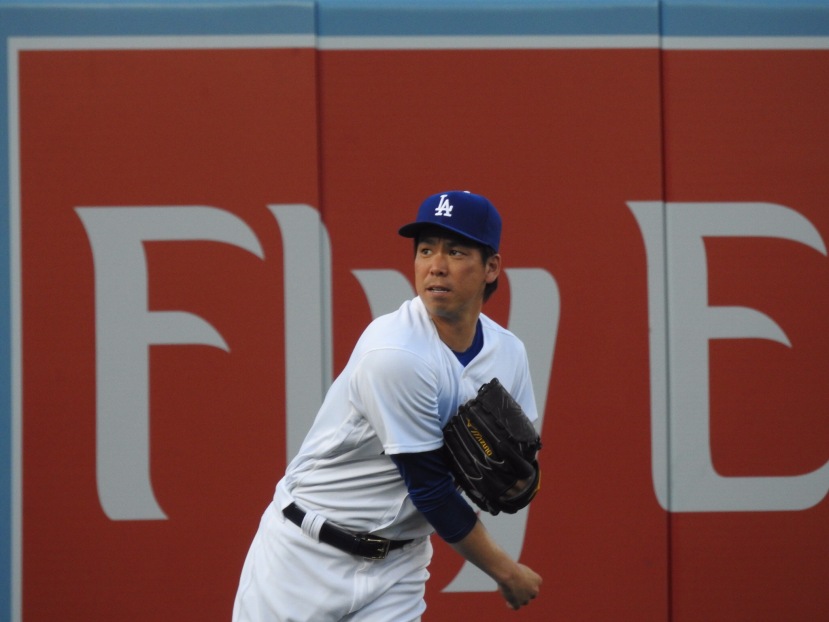 And Maeken continued to warm up 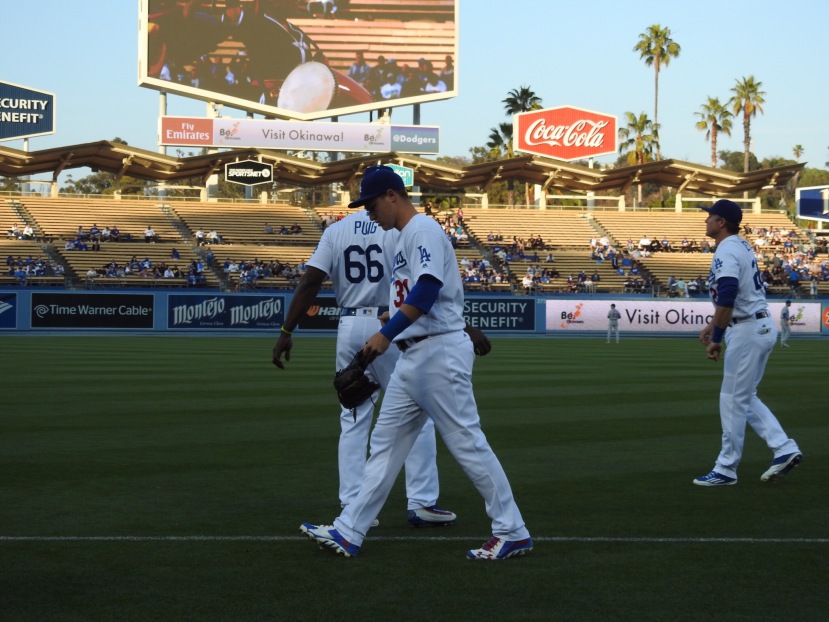 The guys came out one at a time….Chase, Joc, Yasiel.  I’m tired of hearing about Joc…Joc…Joc.  Why can’t everyone just leave him alone?  He actually has the club leading number of home runs.    I’ve just learned to blank them out rather than argue.

Then after all that badmouthing, they were first to stick out their balls for him to sign.  Little by little Joc is starting to sign again.  My take on why he wasn’t signing is that he knew everyone was criticizing him.  He is young and I’m sure sensitive to what the fans are saying.  Let me tell you…they definitely can hear a lot of what people are saying. 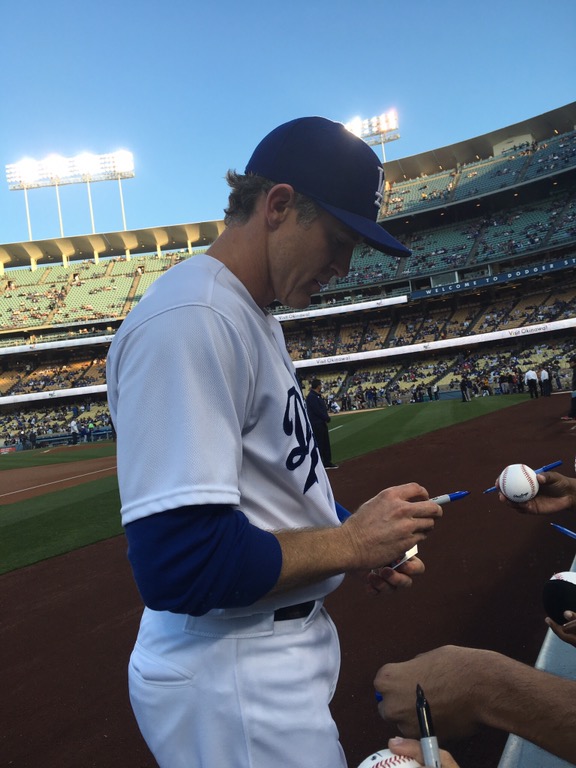 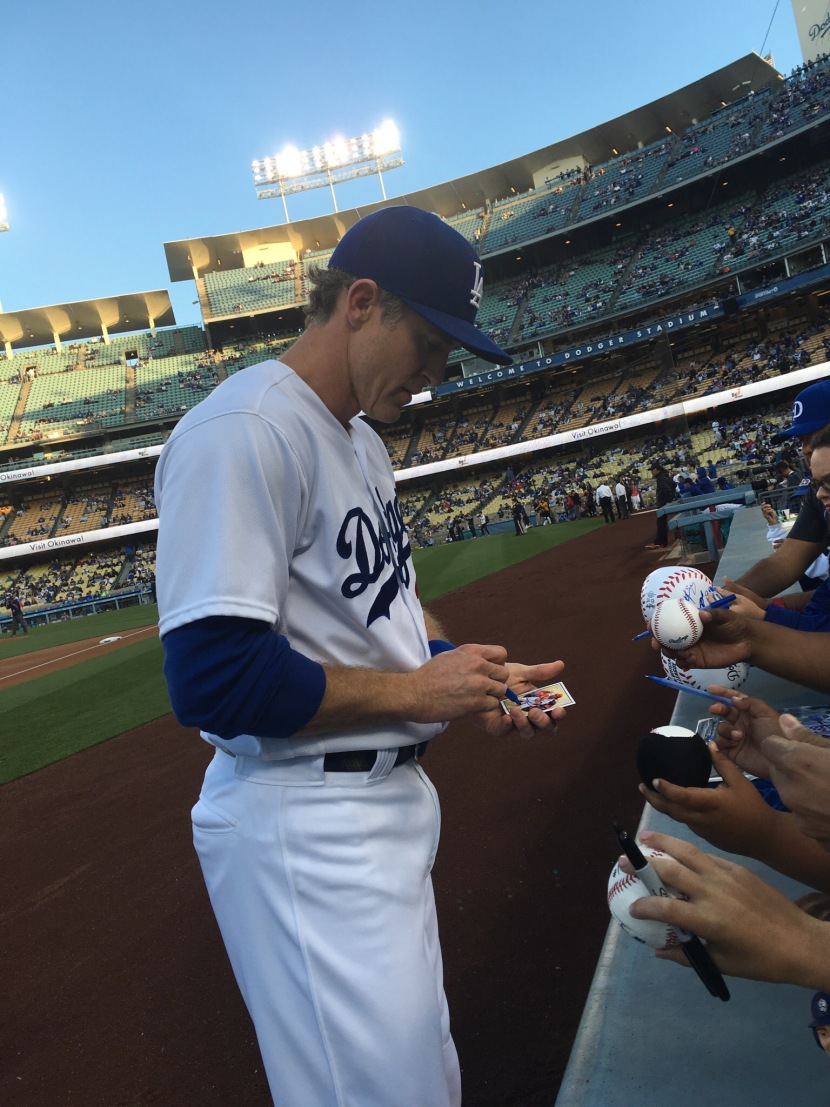 Case in point…They had asked me if Chase Utley ever signed and I said never.  Haha he heard me and see what happened?  He stood right in front of me to start.  I of course didn’t want an autograph. 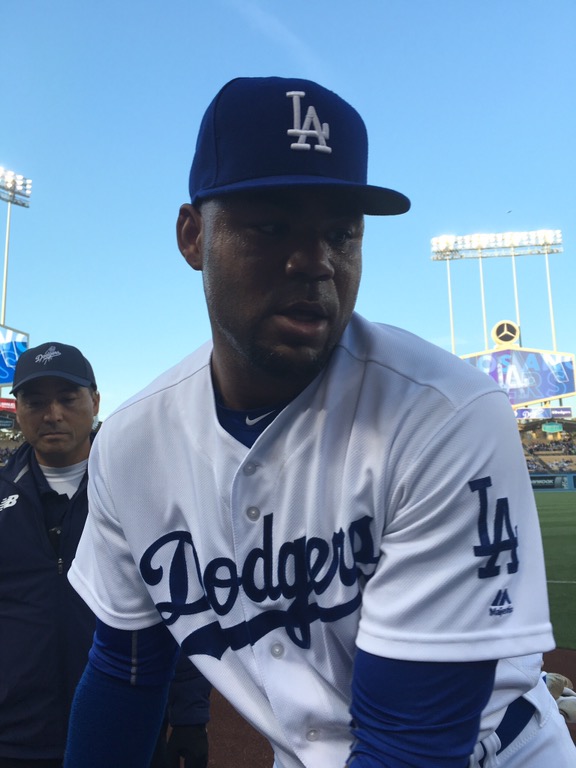 And of course, wonderful Carl Crawford signed as he always does. 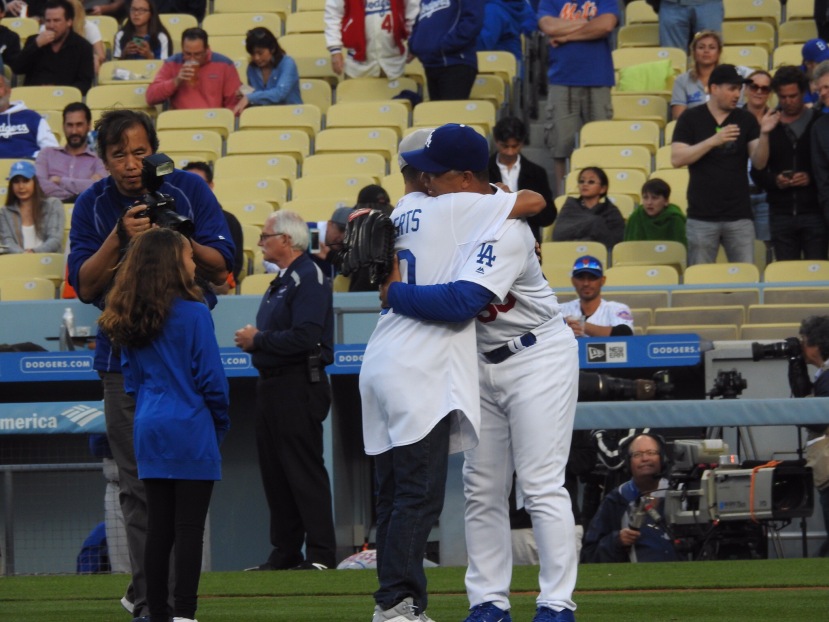 It was Dave Roberts bobble head night.  His kids threw out the first pitch.  I’m always good at taking pictures of backs. 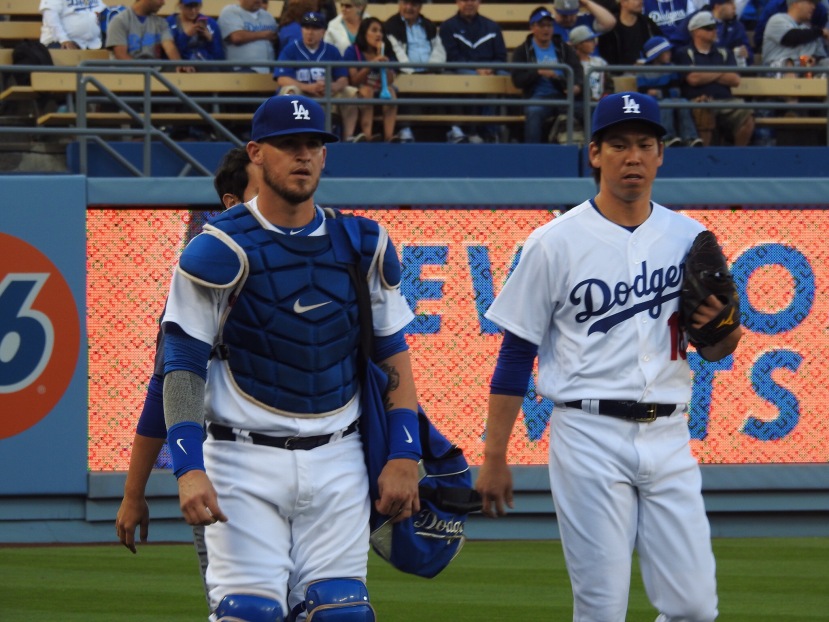 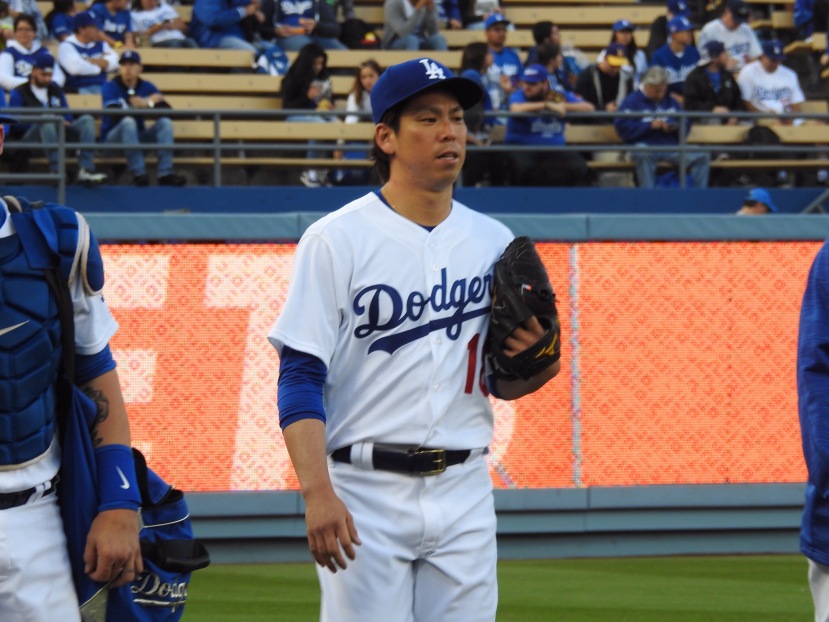 Kenta never even looked our way as he walked from the bullpen to the dugout.

And then the umpires discussed current events. 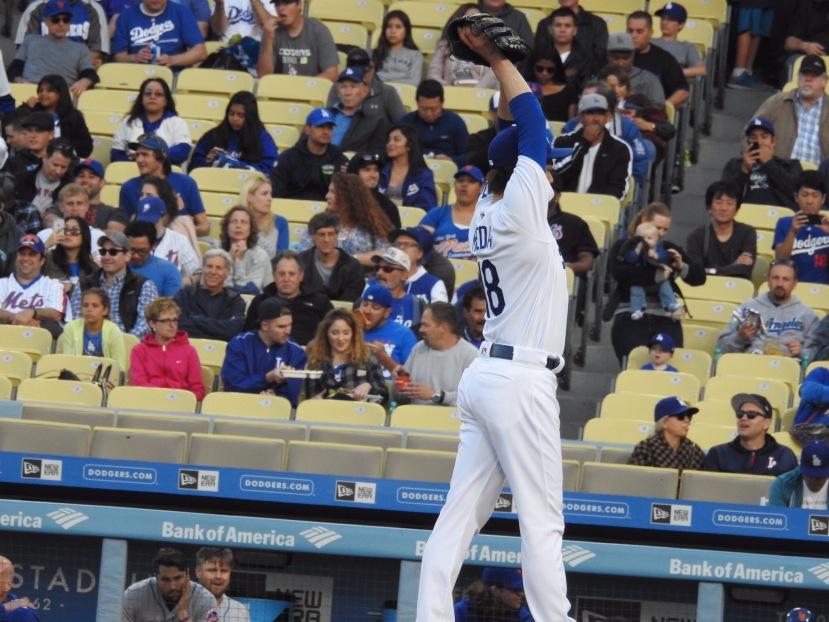 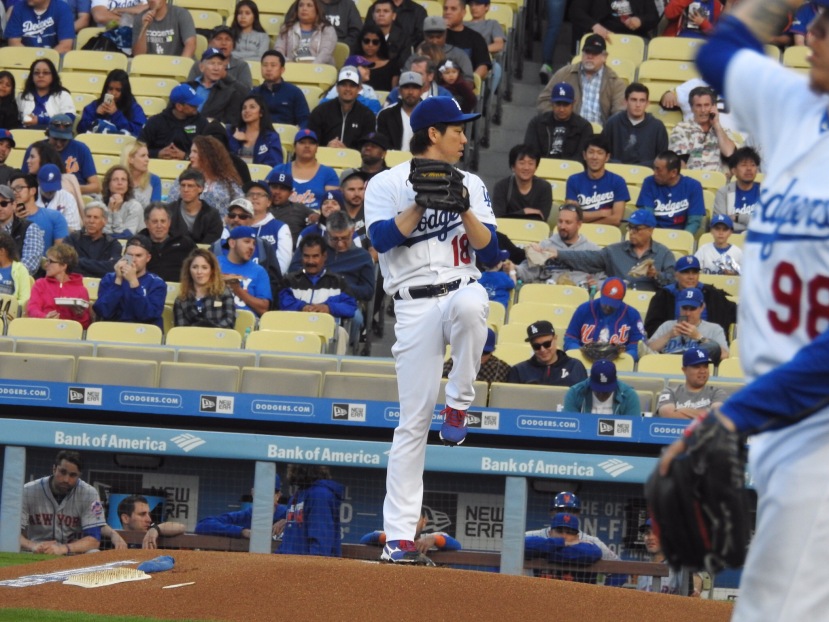 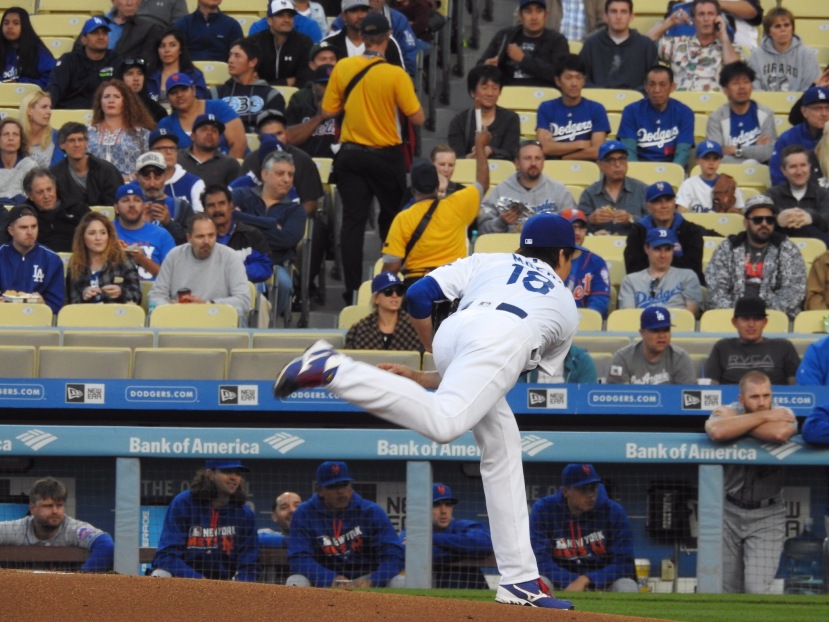 Then it was Maeda’s first pitch

My friend Yoshiko’s husband looked a little dubious about the whole thing.

Devon the batgirl was her usual charming self.  I need to clue her in to give the balls to CHILDREN, not adults who will sell them on eBay. 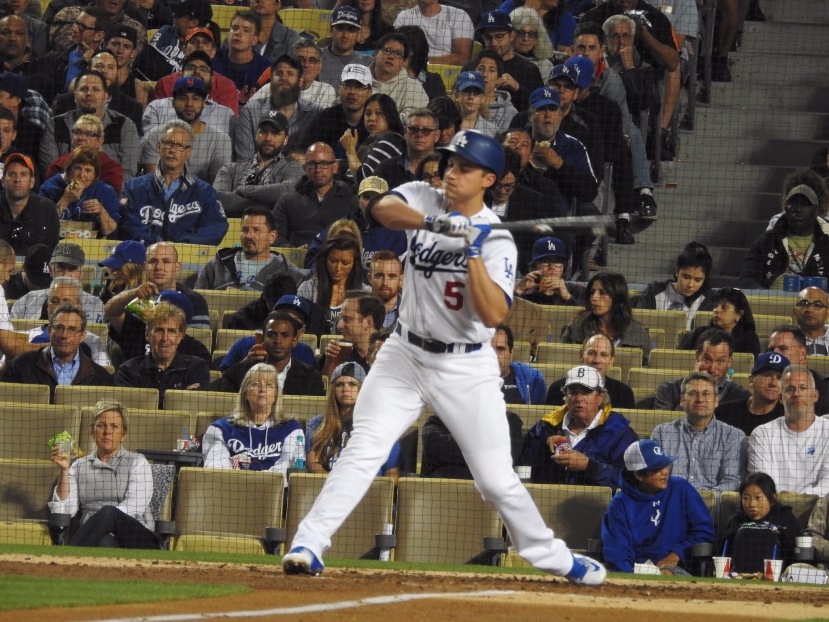 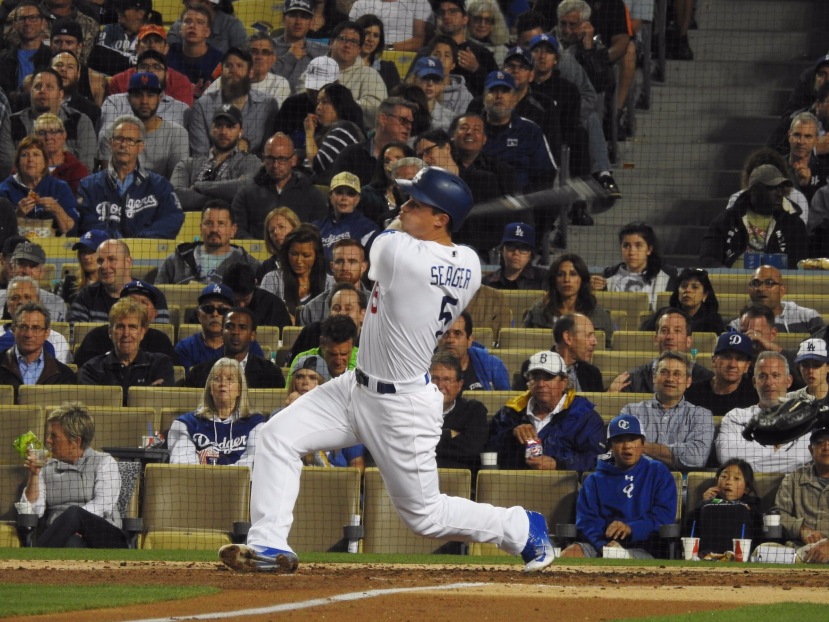 The only Dodger scores were two home runs, one hit by Corey Seager.

And the other by catcher Yasmani Grandal.

And Thor answered by pounding the Dodgers with 2 home runs, scoring all the Mets runs.  He had that Kershaw moment where he did all the offense and defense single handedly.  Remember the Sunday game when Kershaw did it all?
The final score was 3-4.  I left at the top of the 9th inning.  It’s become a bit of a habit for me to leave early.  I blame it on the 6 game losing streak which made me lose faith in last minute wins.  I did stay for Trayce Thompson’s walkoff since the score was tied at that point. 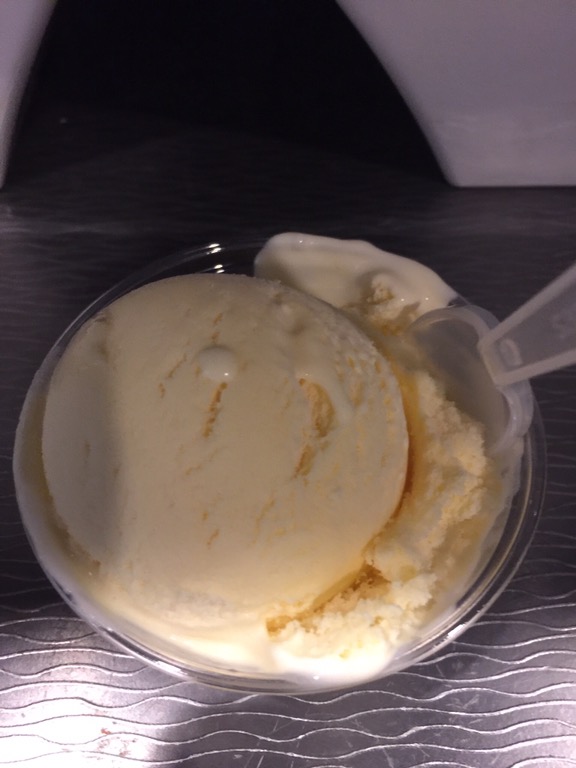 I have to confess that I was watching the Golden State Warriors on the tv in the club for a couple of innings.  Interestingly enough, Trayce Thompson’s brother Klay was playing.  My excuse was that I was eating my ice cream in the club before it melted.

Hopefully Kershaw can get a win tonight.  Surprisingly enough even with the loss last night, the Dodgers are still tied for first place with the Giants.  Go figure.

Thanks for stopping by.  GO DODGERS!!!