Wednesday night was a multi faceted night to say the least.  It was Vin Scully Bobblehead night.  Do I have to say again that I HATE bobblehead nights because it’s usually a sellout crowd and brings out the worst of fans. 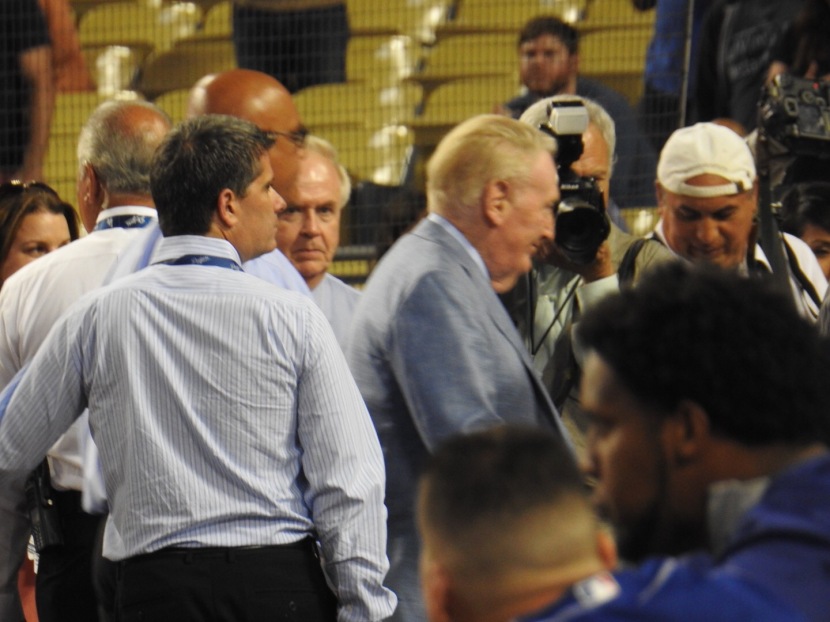 It was nice that Vinny was honored.  When I saw how large his immediate family was and how he had commented before that he works only because so many people depended on him, I realized what a wonderful man he is. 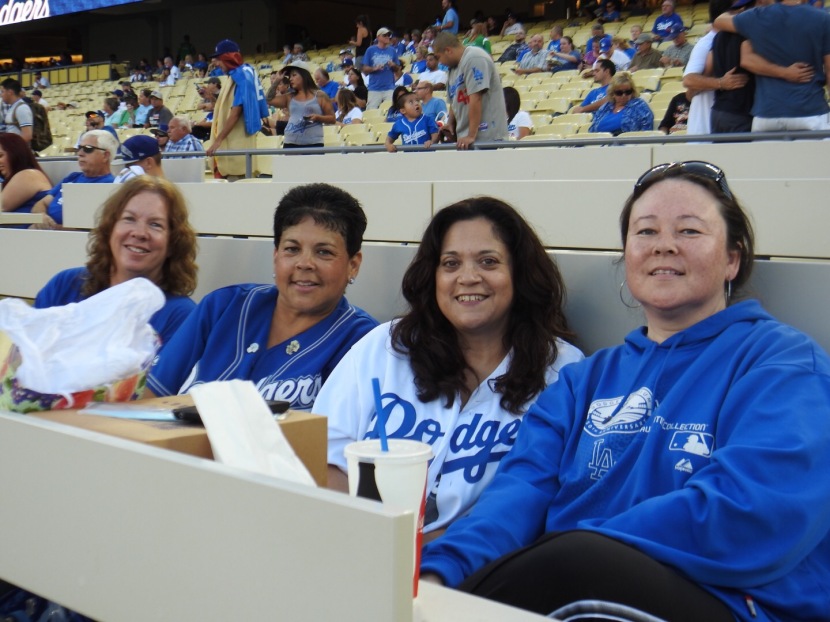 It was also my friend Norma’s birthday.  To celebrate, she and her friends were on the field.  Pictured are from the left:  Donna, Cece, Norma and Mika.  Happy birthday Norma. 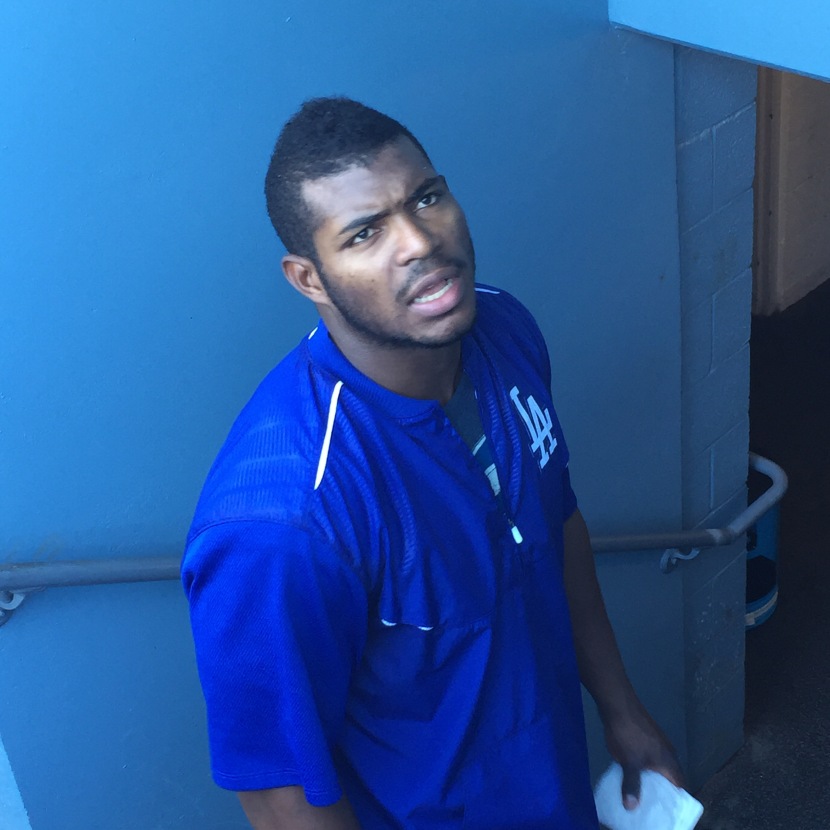 Yasiel came out for a minute and said hi.  It looks like Yasiel won’t be back before the end of the regular season.  He has not been his usual happy self. 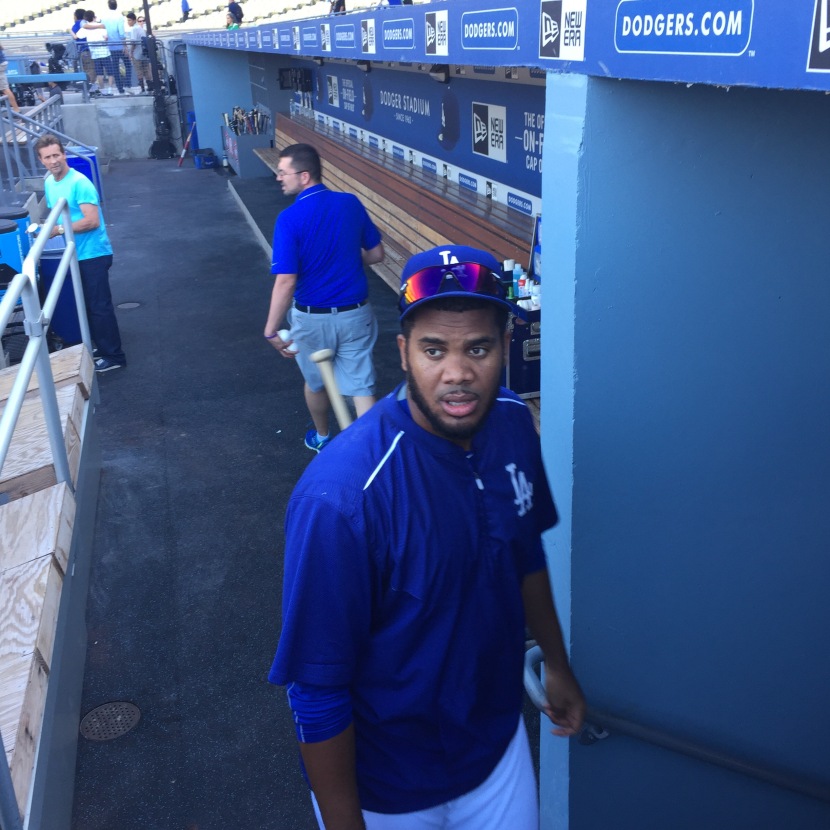 I teased Kenley asking him if he would have a chance to bat since he seems to be swinging a bat out in the field lately. He just grinned and said he hoped so. 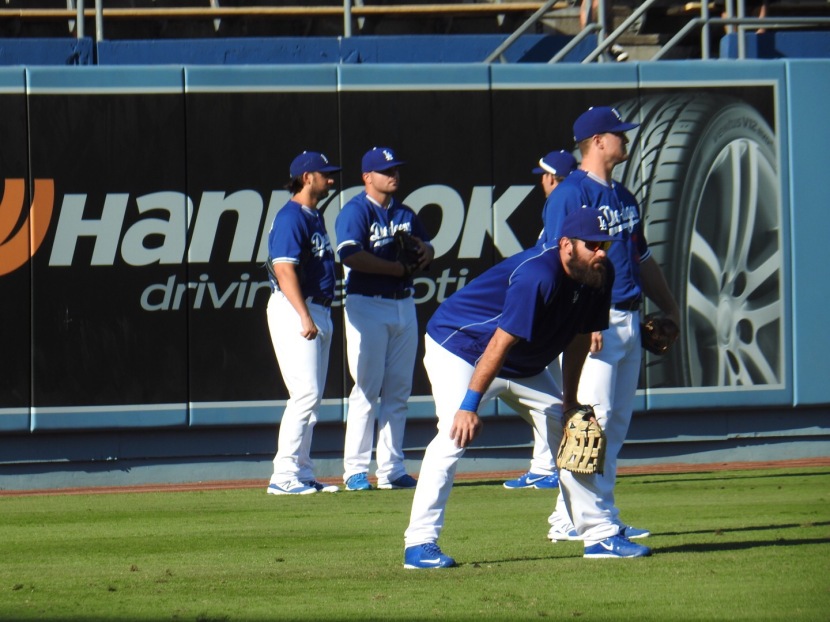 It was batting practice as usual.

I had to take my pictures of Zack.  He’s become my favorite person to take pictures of.  Zack was supposed to start Wednesday but was scratched because of right calf pain but is expected to be able to start when his turn comes up again.

But Zack is definitely my favorite. 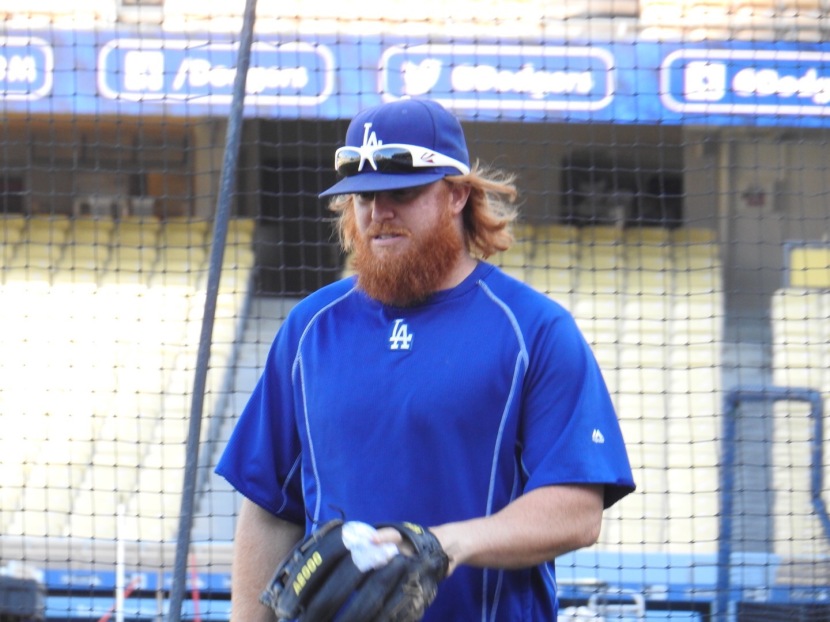 We’ve been waiting for Justin to return 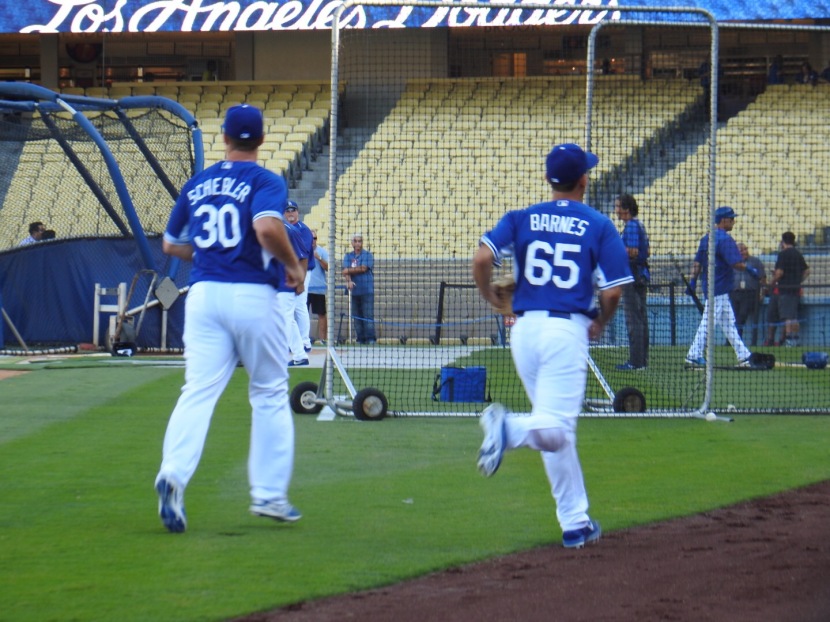 They all went in so I went up to the club to eat. 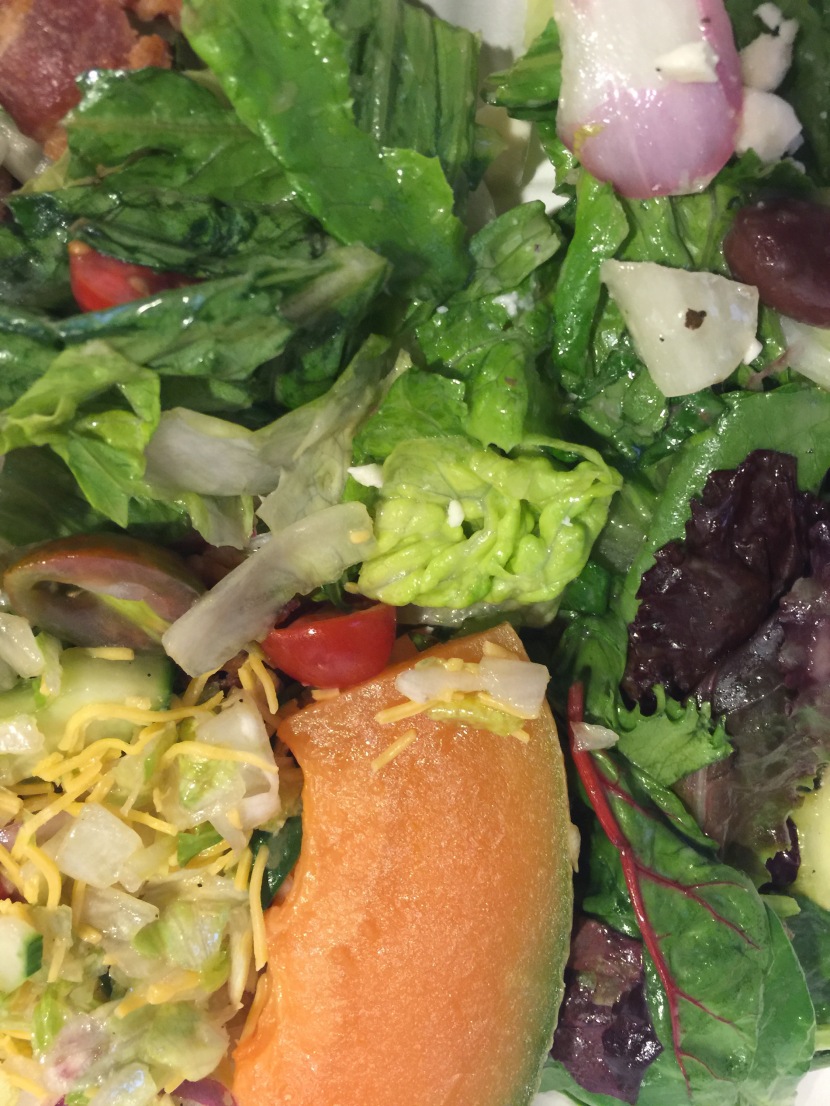 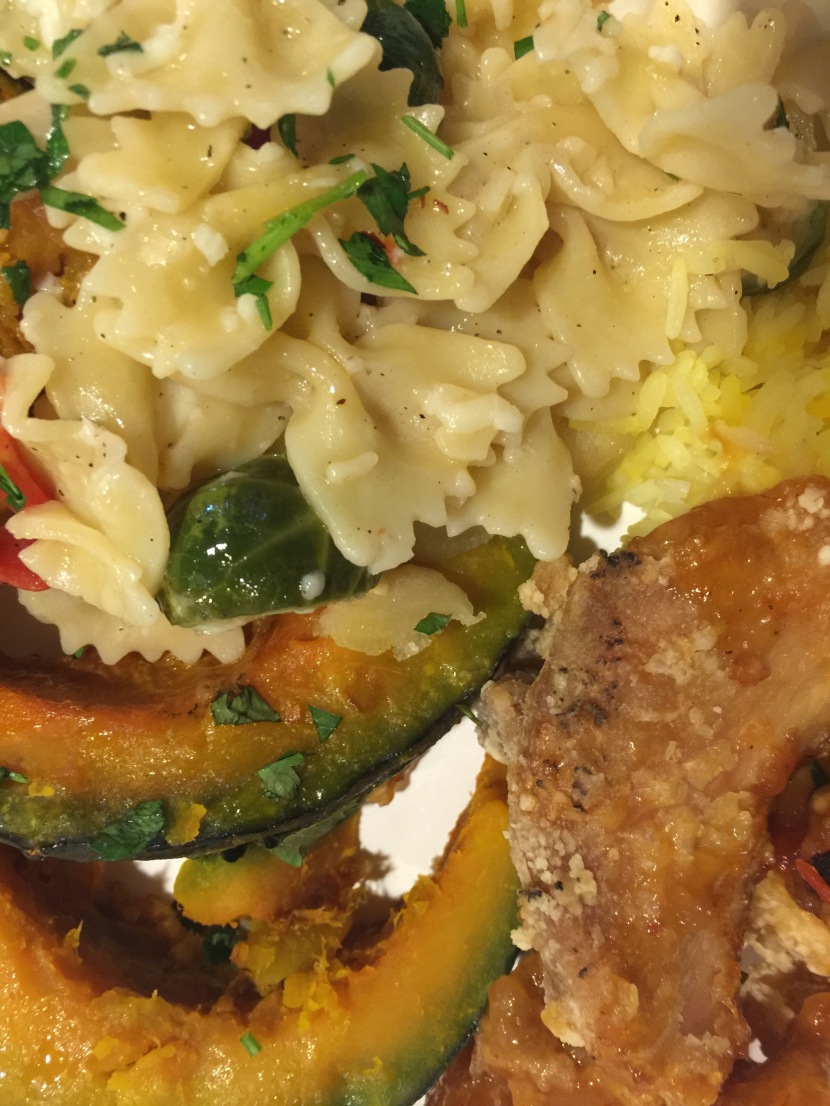 The food has had an Asian theme lately.  The sweet and sour chicken was actually pretty good.  I love acorn squash anyway so I was happy.  The salads as usual were the best. 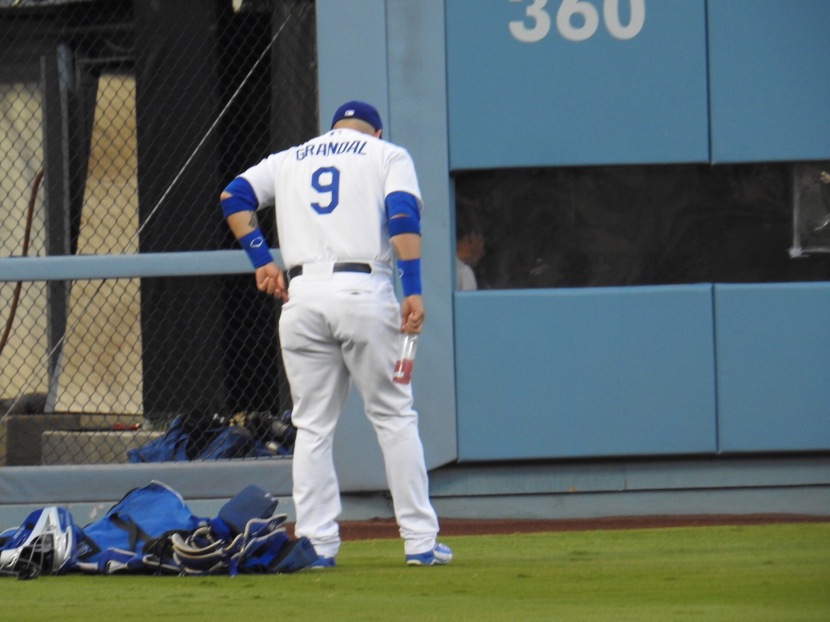 Yasmani as usual walked over to the bullpen to work out and get ready.  Always have to have the magic pink drink. 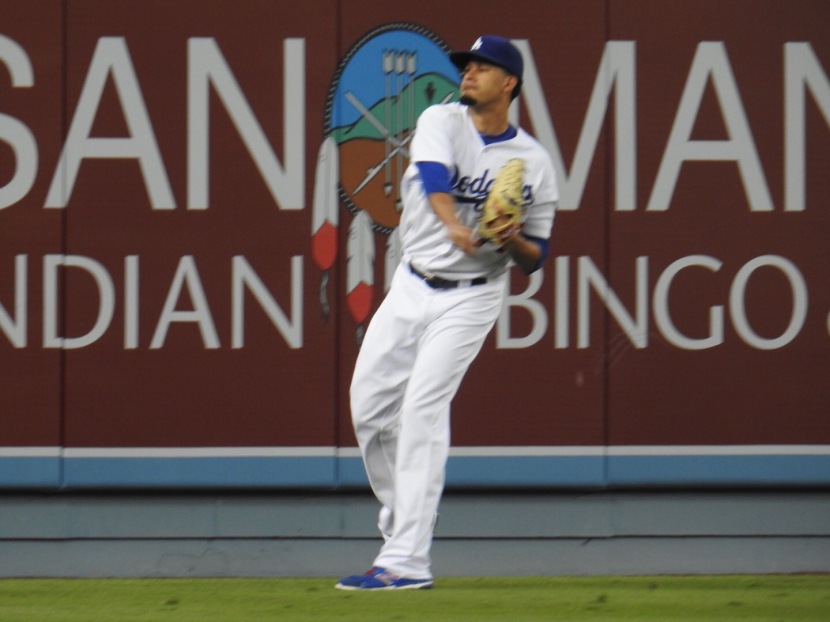 The surprise was the starting pitcher:  Carlos Frias who had just come back from DL with a lower back issue.  He was grateful for the opportunity to start after spending time in the bullpen.  Since he was out of the bullpen, he was going to be limited to the number of pitches.  Many of the fans didn’t know that so was critical of Mattingly for taking him out after only 43 pitches since he did so well.  He only allowed one run, a homerun to Goldschmidt in the  2nd inning. 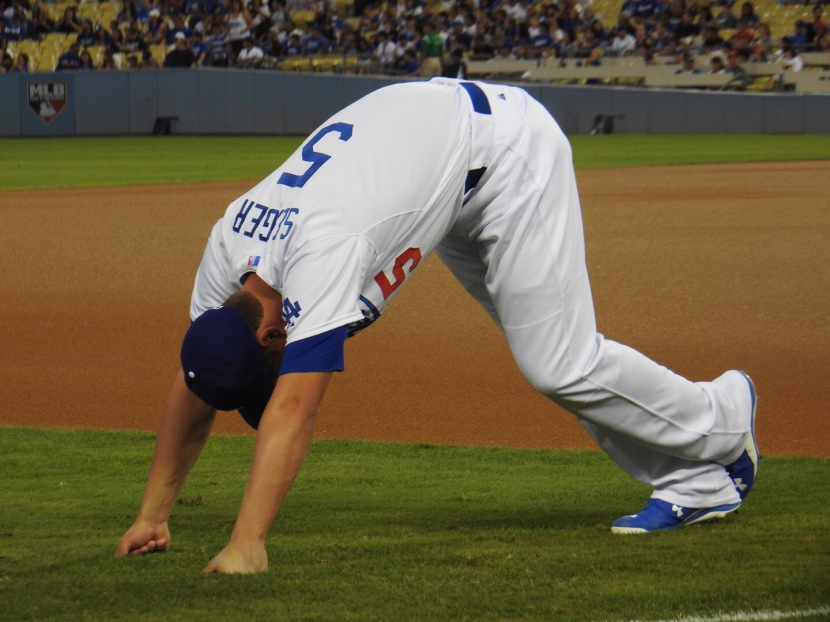 The guys did their pregame stretching.  We were all glad to see Jimmy back at shortstop.  Corey Seager was moved to third base.

Yogi Berra was honored before the National Anthem

Carlos Frias and Yasmani made their way to the dugout.  Apparently Carlos had a few secrets to tell Yaz. 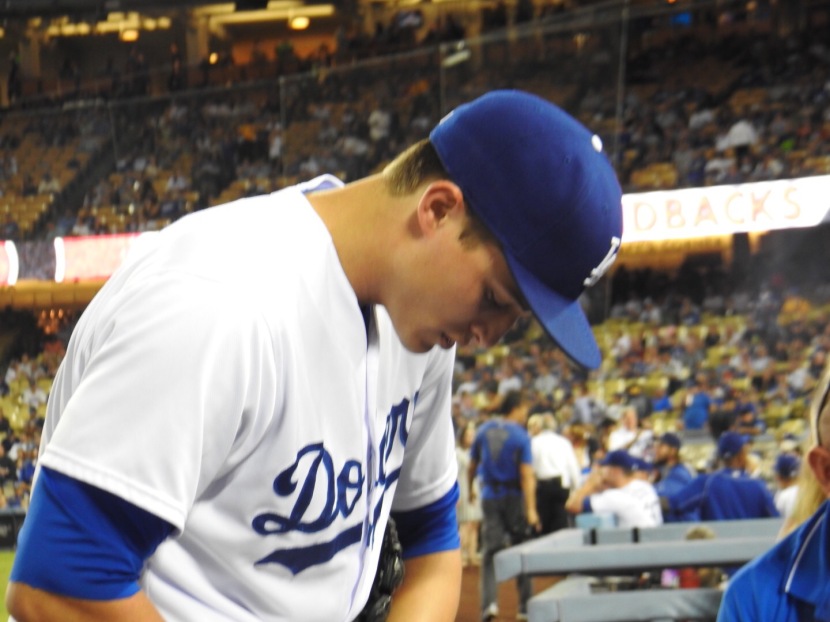 Corey signed autographs as he does every game he starts.  He is everyone’s favorite. 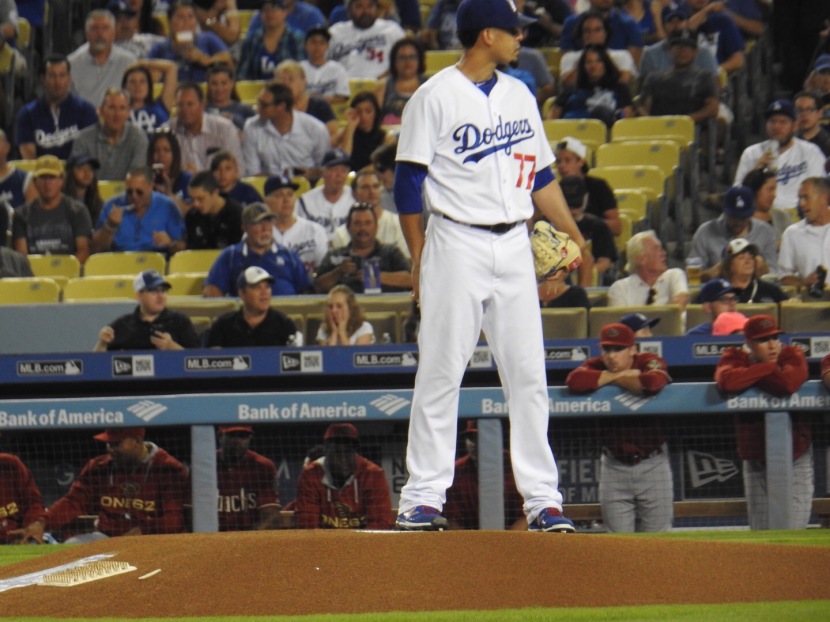 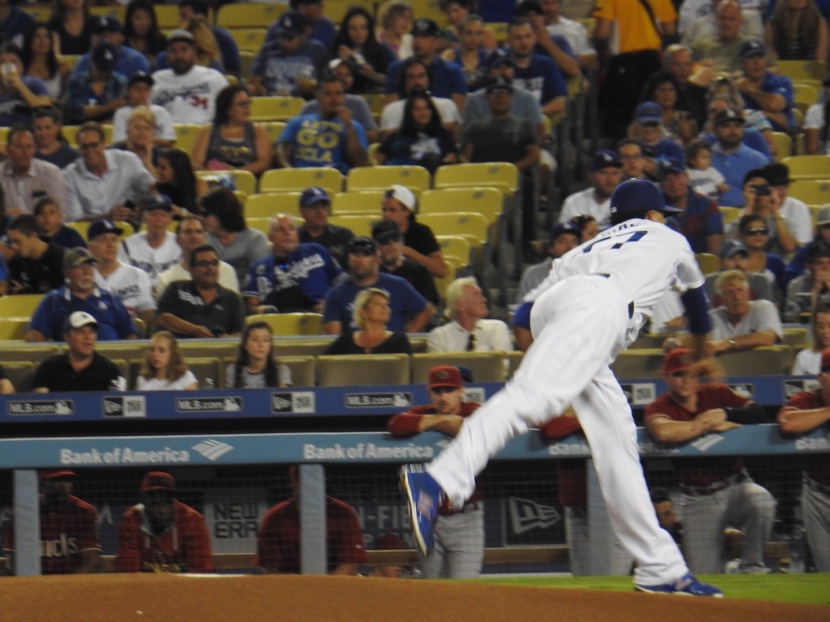 It didn’t take long for the first score.  Chase Utley hit a solo homerun, the first of his career as lead off. It made the score 1-0 right off the bat.

But in the 2nd inning, Goldschmidt answered with a solo homerun of his own making it a tie score. 1-1 which stood until the 8th inning.  Goldschmidt always seems to give the Dodgers problems.

With Jimmy on base, Chase hit an RBI double in the 8th scoring Jimmy.  2-1.

But to add to the score, Corey Seager, the flavor of the moment, hit a huge homerun scoring Chase making the score 4-1.  Of course, the D Backs blamed the bullpen phone which they said was not working.  Their relief pitcher had not had a chance to warm up. Oh well, welcome to the big league,  guys.
Chris Hatcher was credited with the win after pitching 2/3 inning in the 8th. 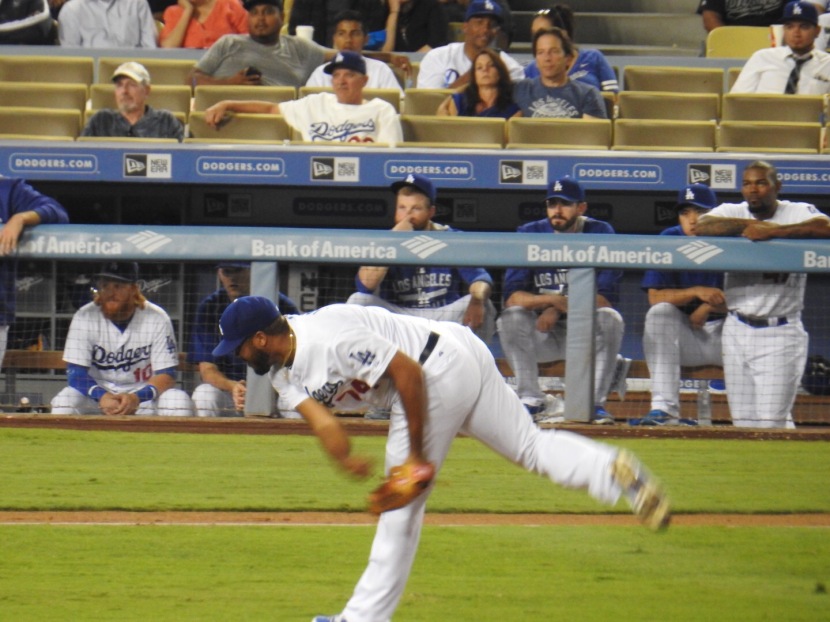 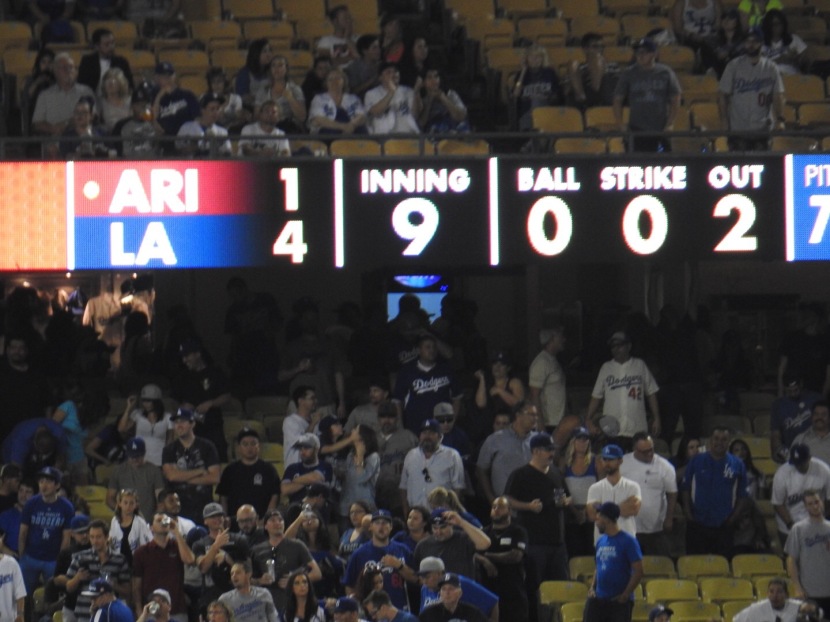 When the scoreboard looks like this, it becomes very exciting, especially when the team is in a 4 game slump.  Kenley came out to close it out, the final score being 4-1.  The magic number seemed to be stuck at 7 but now it was at 6.

Everything seemed to be right in the world.  When we learned that Zack was not able to pitch, we had lost hope.  When the score stayed tied until the 8th inning, we feared an extra inning game.  We were not sure of Frias after being on DL for so long.  But it all worked.  Thanks to the Giants, the magic number became 5!!  Also thanks to the Padres and especially to Matt Kemp who was also celebrating a birthday.  Happy Birthday Matt!

Thank you for stopping by.  Sorry for the late post but the Thursday game was an early game.  GO DODGERS!!!